Heres a superb new online slots from Microgaming that you can enjoy.

Join the ‘Rat Pack’, a gang of singing, dancing rodents in a whimsical homage to the real-life ‘Rat Pack’ – a group of musicians who were also prominent figures around the Las Vegas casino scene in the 1960s.

The real-life pack included stars such as Frank Sinatra, Sammy Davis Jnr and Dean Martin, though developers Microgaming have gone for a more literal spin on the term in this online video Slots games.

Microgaming was founded in 1994 and claim to have created “the world’s first true online casino.”

Having developed a staggering amount of top-drawer games over the years (including Mody Dick, Terminator 2 and Diamond Deal), they are certainly now regarded as one of the best developers in the business.

This effort was recognised across the different industry award ceremonies in 2017. At the EGR B2B Awards, they were presented with the award for Best Mobile Gaming Software. On top of this, they won the 2017 award for Mobile Product of the Year at the International Gaming Awards and they also won the 2017 Spark Award for their ‘Idea Factory’ initiative. If you love promo's, get the best casino slot bonuses right now! 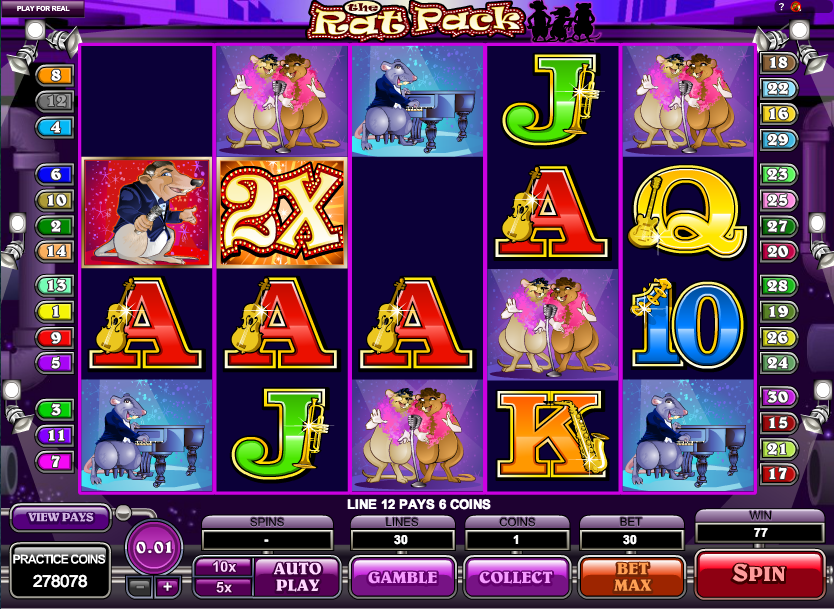 The game has 5 reels and 30 pay-lines. The Autoplay option allows you to spin the reels for a selected number of times without a break, while the Max Bet option will set the maximum bet allowed and the Gamble option will allow you to activate the gamble feature after the win.

The game’s logo is the Wild and it takes the place of all other symbols in the game apart from the Scatter and multiplier symbols. The Wild symbol can create winning combinations by itself and also and when it takes another place.

The Wild Multiplier symbol is represented as ‘2X’, which obviously doubles the payout of any combination where it replaces another symbol. This symbol takes the place of a regular Wild symbol and it can also cause a winning combination when five symbols appear together in a line on a pay-line.

The Vinyl Record is the Scatter card and can also create scatter wins. If you manage to collect three or more Vinyl Records, the Free Spins mode is activated. Whenever a scatter appears on a reel in Free Spin mode, the same reel is held for the following spin. On the next spin, the scatter is moved down by one position. Free Spins mode ends when there are no Vinyl Records remaining.

Whenever a winning combination lands, it can be either doubled or quadrupled by using the Gamble button. When you use the Gamble button, you are then asked to guess whether the next card to be drawn will either be red or black. Guess correctly and you’ll double your winnings and if you can guess the suit then you’ll quadruple your winnings but if you guess incorrectly then you’ll be taken back to the main game. 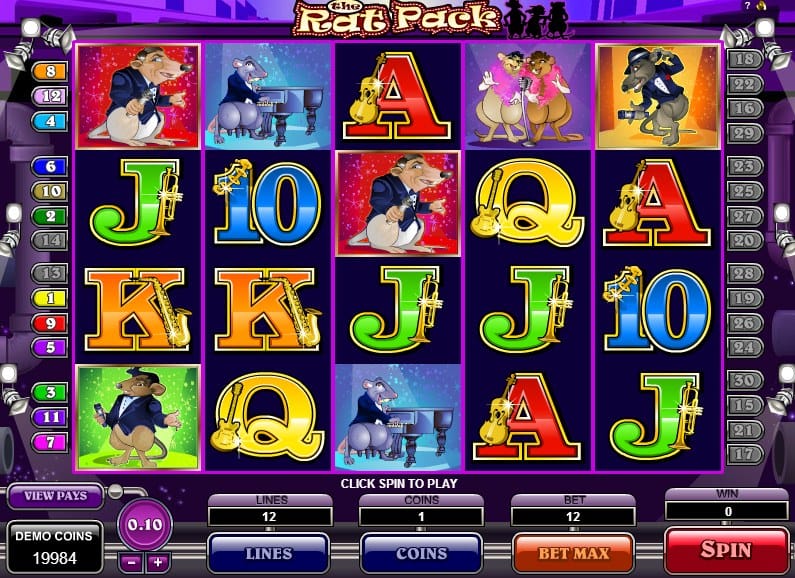 This fun online slots game is a hugely enjoyable experience. The ‘Rat Pack’ theme is well implemented through the design of the cartoon rat entertainers and the vinyl record symbols and the ‘red or black’ mini-game is a simple and effective method of complimenting the main slot game.