Who does not love romantic fairy-tales? Here's one of the new online slots game from Eyecon called Enchanted Prince. You’re destined to have an enchanted time playing this exciting release. The Brothers Grimm fairy tale, ‘The Princess and the Frog’, has captivated readers for centuries. This tale has even been made into an animated Disney film, in 2013. It tells the story of a beautiful princess, who, in spring, loses her beloved golden ball. She promises a talking frog her love if the little creature returns the ball to her. However, to the Frog Prince’s dismay, the princess breaks this promise. He’s left lamenting at her door, begging for her affection in the Enchanted Prince Slot. Her father, the King, reminds her of her responsibility (as fathers tend to do) to the doleful amphibian. In response, the princess invites him into the palace and lets him share her dinner. She also allows him to sleep on her pillow for three nights. (This may be unhygienic, but it’s important to keep a promise, even to a frog). As luck would have it, this breaks the evil witch’s curse, and the cute little frog transforms before her eyes. He turns into a handsome young prince, who sweeps her off her feet. And, they both ride off into the sunset and live happily ever after.

When playing The Enchanted Prince slot, you will feel immersed in the magical world of this fairy tale. It has all the hallmarks of the classic story. Pretty princesses to towering castles. Dashing princes and evil witches. So, pucker up, and prepare to lay a smacker on this adorable moist Slots game. If you love slots, visit Slotsbaby today.

Once upon a time, there was a software developer called Eyecon. They specialised in bringing traditional slot machine games around the world. Before long, they heard about the wondrous new world of online slots gaming. And, they set out, fearlessly, to conquer this new land. This was well over a decade ago, so a long, long time ago. Eyecon is intimately familiar with the gambling industry. This Australian company now has over 100 slot machine titles to their name. This is in addition to their bingo titles and live casino classics.

They try to make titles with immersive gameplay. Many of their games share this quality, for example:

They also specialise in favourite arcade staples, with titles such as: 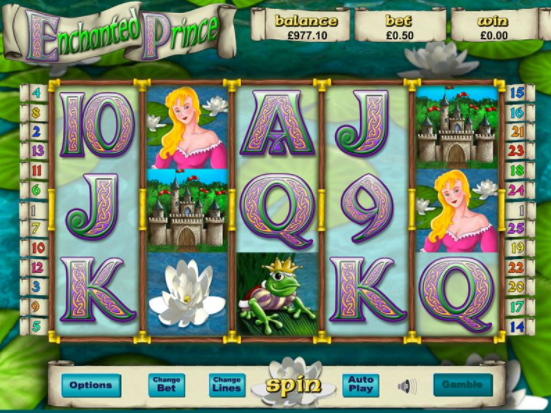 Enter the court of the Enchanted Prince and bask in its wonderful graphics and rich bonuses! It has 25 pay lines over its 5 reels, and bets of up to 20 credits per line, per spin. This game’s elegant design and dynamic gameplay are sure to enchant even the most pessimistic slot player.

This awesome game, Enchanted Prince, takes place at the heart of a fairy-tale. The title is unfurled on an ancient-looking scroll across the top of the reels. The background is a lush lily pond, home to the Frog Prince while he waits and dreams of regaining his riches with true love’s first kiss. The reels are housed in a luxurious frame of dark wood and gold. The symbols are all attractive and suitably regal. There are glistening ruby hearts and majestic castles with red flags waving on their turrets. There are also lily pads, princesses in pink gowns, and J, Q, A, 9 and 10 symbols in a Medieval illumination style font. This adds that extra touch of mysticism to the game. Enchanted Prince is a mesmerising experience. If you doubt us, try watching these pretty symbols spin by. But the real magic starts when the bonuses are activated

SCATTERS. – 3, 4 or 5 frog symbols anywhere on the Enchanted Prince reels will trigger free spins. These can range in amount, from 15 to 25. The game is generous with its free spins, too, and they can be re-triggered up to 15 times. As a charming detail, SCATTER symbols will also animate when activated. They will present a short animation of the princess kissing the frog. After this happens, the frog will transform into a handsome prince.

WILDs. – a glittering crown symbol. It can be a substitute for all the other symbols apart from the frog SCATTERS. These WILDs will also double your win when they appear in a win line on Enchanted Prince.

GAMBLE. – when active, this bonus pays double or nothing on your last win. This gives you the chance to transform small wins into big ones in less time than it takes to kiss a frog.

The reels on Enchanted Prince are smooth and silent. The Autoplay feature is easily activated by an option beside the spin button. This can be set to 10, 20, 50 or 100 auto spins. Allowing you to sit back and watch the wins appear as if spawned by your Fairy-Godmother. It’s simple, too, to adjust the lines, and your bet amount, so nothing detracts from the flow of the gameplay. If you’re just dipping into the lily pond for the first time, you can set your bet to as little as £0.01, and play for small wins. But, your total bet amount can be raised to up to £0.50, which is sure to satisfy those with richer bloodlines. 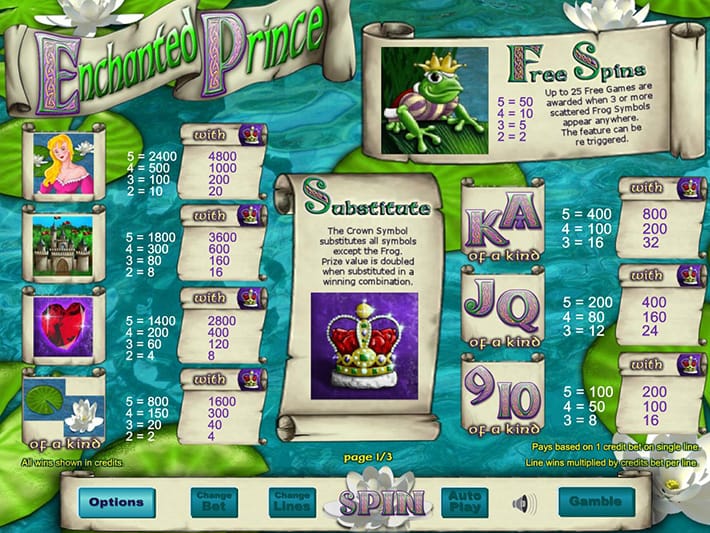 The Verdict on Enchanted Prince

Enchanted Prince is an elegant, absorbing game. There is more than enough bonuses and features to keep the gameplay interesting. Its lush graphics and perfectly executed fairy tale theme are a joy to play. And, the quality of its bonus features is fit for royalty. This beautiful addition to Eyecon’s gaming library is sure to keep you hooked for weeks! You will live happily ever after. If you enjoyed Enchanted Prince then you might also like Dj Wild. Play on Slots Baby, now