Midas Gold is one of the best new slots with a 5 reel, 243 ways to win slot by Red Tiger Gaming. The slot is based on the mythical Greek king who changed everything he touched into gold. This slot features high-end design, streak re-spins and is playable on all desktop, mobile and tablet devices for stakes starting from 20p to £500 per spin. everything that you would expect on the best online account games site!

Red Tiger Gaming was formed in 2015. Despite being in the game for a brief time, they've delivered quite some impressive results. The tiger logo has become synonymous with all of its games. Their success is credited to their diverse team of talent including psychologists, account managers, mathematicians, designers, developers and more. 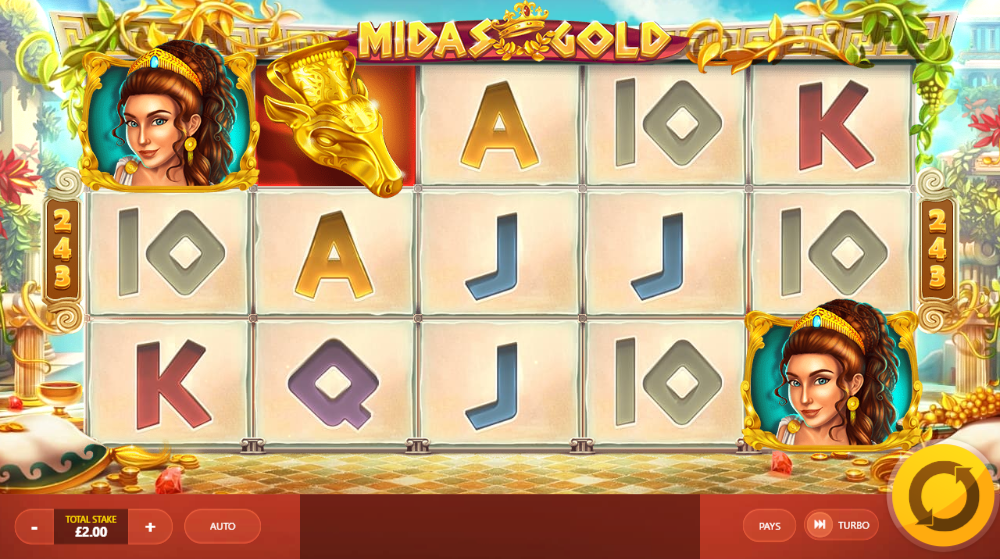 The slot has a lush feel to its imagery in Midas Gold. It plays out in an ancient palace courtyard, there are marble columns on either side of the reels. There are low value A to 10 symbols on the reels, a mighty gold throne, a gold-trimmed bowl of fruit and a golden goblet. The best paying symbol is the woman who awards 2x, 4x or 8x your stake if you hit 3, 4 or 5 of them respectively.

The spins continue as long as a new J symbol lands. Midas can also re-appear and point at a new, higher value symbol. All the symbols that made up the original J cluster transform into a higher value symbol. Again, the respins will go on until no new matching symbols are added. what a way to maximise winnings, especially when combined with casino promotions!

Midas Gold is a pretty volatile game that offers maximum payouts of 2,000x your stake on every spin or respin. It's not uncommon to go through lengthy runs where you win virtually nothing.

Midas Gold looks and sounds good. According to Greek mythology, Midas turning everything he touched into gold was regarded a curse for Midas, but for slots players, that could be your luckiest power as this is one of the best online slots to win money