Cops and Robbers is a Fruit Machine online slots casino by Microgaming. They have taken the age-old battle between good and bad, added some fun and humour to the mix and developed this game. This 3 reels, 1 pay line Slots Games has a minimum bet of £0.10 and a maximum of £10.

This online slots game Cops and Robbers is old school but certainly not traditional. It is packed with all sorts of bonuses and features but doesn’t expect any Wilds or Scatters. Instead, the slots game offers Nudges, Chaser Trail Bonus, Inside Jobs, and over a dozen more! If you love promo's, check SlotsBaby today. 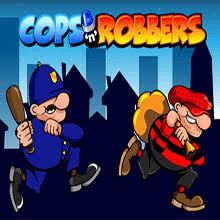 Microgaming - the Developer of Cops and Robbers Slots

Microgaming began their journey from the Isle of Man in 1994. They release new slots at an astonishing pace with a speciality in Jackpots. In fact one of their games, Mega Moolah, is responsible for the biggest Jackpot wins of all time: £13! Some of their other online slots games are: 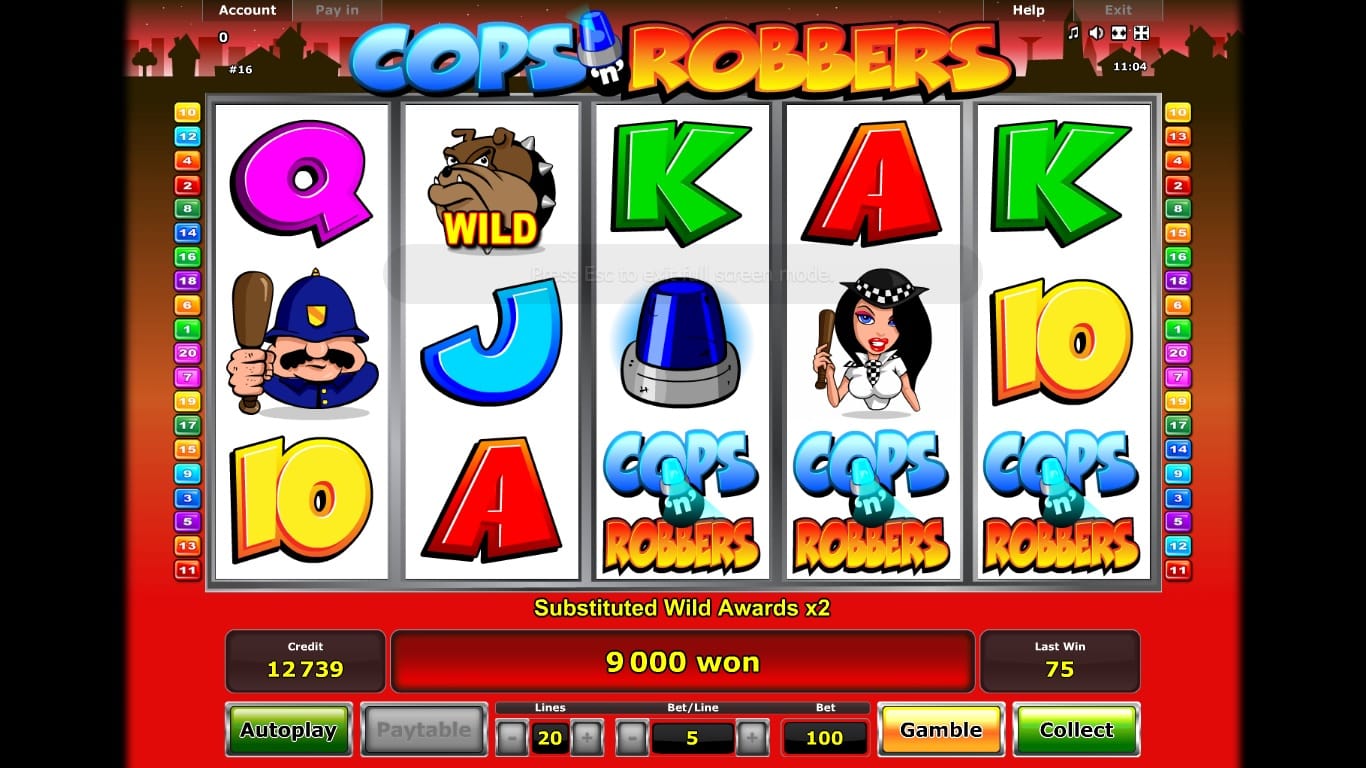 The game is fashioned more like a pub slot rather than a video slot game. It has a great premise, which follows through. With challenges like robbing the bank and outrunning the cops is a great edition. However, the brilliance of this online slots game has to be its numerous features and bonuses:

This feature happens at random and has the ability to hold the position of the symbols in one or more reels for the duration of the next spin.

This feature on Cops and Robbers allows you to ‘nudge’ a reel in order to display the next symbol. You win the nudges randomly with a possibility of winning 4 maximum nudges per spin.

Nudge Bank Feature: May you choose not to use the Nudges you’ve won, you can deposit them in the Nudge Bank and use them on your next spin. If you do not use them in the next spin, they will be forfeited.

Nudge Repeat Feature: In this feature, you can win the same number of nudges that you just used in your previous spin

Nudge Gamble Feature:Here, you can gamble the nudges in your Nudge Bank to win more Nudges. If you are successful, you can win a total of 4 extra nudges.

LET’EM SPIN FEATURE
If 2 of the same symbols appear on the pay line and you do not have any nudges at your disposal, the Let’em Spin Feature may get activated randomly.

CHASER TRAIL BONUS FEATURE GAME
This is a bonus game where players take on the role of the Robber and attempt escaping the Police in a 36-squared trail. . If you get caught, the bonus game ends and you return to the base game. If you are successful, however, you can win up to a 200x multiplier on your stakes, along with other additional prizes on the trail (below).

? (Mystery Square): Gives you one of the following options: Continue, Carry On, Skill Continue, Lose, Boost

Whistle Blower: Choose when to stop the reel

Multiplier Values: This can multiply the bets from 4x to 200x

Nudges: Win between 2 and 50 nudges that help you nudge the reel for the next symbol

Win Spins: Between 2 and 20 Free Spins to be won

Inside Job: You will be awarded a Random Win

Swag or No Swag: Gamble feature

Costa Del Cash: Reel-Based Feature where you need to ‘Stop’ on a symbol to be awarded a prize

Cops and Robbers:Reel-based feature that guarantees players a winning combination 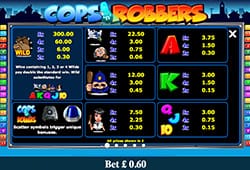 The Verdict on Cops and Robbers

Cops and Robbers has packed in a lot of goodies in their 3 reels, 1 pay line slots game. The list of their features and bonuses trail on along with the running convict. Despite its various features, it is easy to play and navigate. Kudos to Microgaming for delivering yet another classic! If you enjoyed Cops and Robbers, you might like Super Cash Buster