Here's one of the superb slot games online from NextGen Gaming. In ‘1001 Arabian Nights’, Aladdin rubbed a magical oil lamp to release a powerful genie who granted wishes to fulfil his heart’s desire. Genie Wild is a new online slots game that will surely fulfil all your desires and more. Journey to the mysterious and beautiful land of the Far East, where the smell of spices fills the air, and in any ornate bottle might lurk a genie ready to bestow unimaginable riches upon you! You’ll meet the Genie of the title, a blonde, blue-eyed young girl who resembles the title character in the 1960s sitcom ‘I Dream of Jeannie’, and spin the reels for a chance to share in some of her riches.

Make sure to visit promo page to take advantage of UK casino bonuses!

NextGen is responsible for a diverse but consistently impressive catalogue of games, each of which is such a unique gem it’s hard to choose between them.  Their reputation is founded their reputation on cutting-edge online gaming, and many of their titles can be played on mobile, too.  Some other of their popular titles include:

Strong, well-realised themes, as well as detailed and beautiful artwork, make their games an immersive delight for both the casual and the more serious slots player.  You’ll know you’re playing a NextGen game from the stunning, high-res graphics, slick finish. Another top selling point is their inventive and refreshing slots bonus content, that sets their games apart from the crowd. 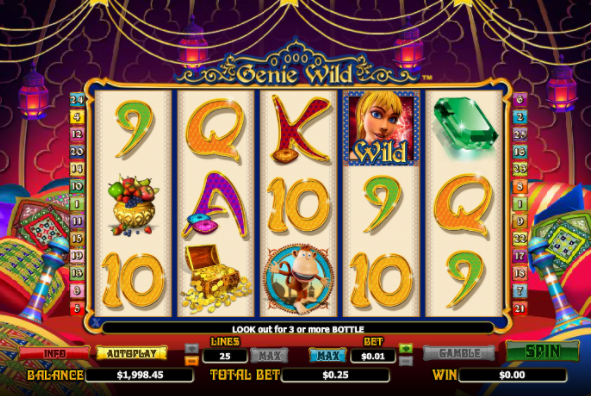 The background to the Genie Wild game is opulent but cosy Far Eastern décor, including intricate cushions in jewel colours, glowing lanterns, and magnificent vases.  It feels as though you may well have shrunken down and been welcomed into the lavish interior of the Genie’s private bottle, where she dwells when she’s not busy granting wishes.  The five reels are adorned with a variety of exquisite symbols, including letters fashioned after pieces of jewellery, bowls of fruit, monkeys, emeralds, and overflowing chests of gold.  The game is rich in bonus features, including: 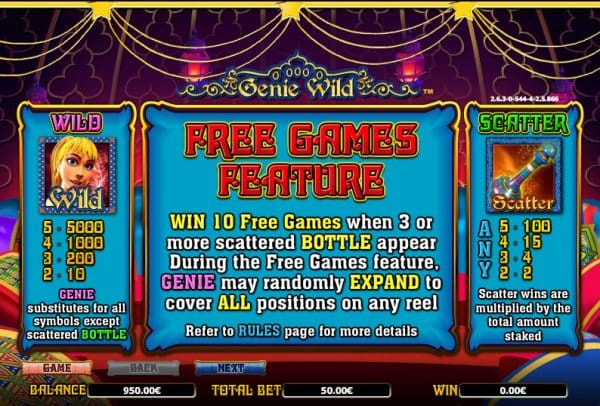 This game is as rich, attractive, and full of treasures as a Far Eastern bazaar.  The task of finding multiple symbols for big wins, alongside the smaller glittering jewels of win-lines, makes the game varied and exciting.  You’re sure to want to polish the bottle to release this Genie over and over again! If you enjoyed Genie Wild then you might also like Mona Lisa Jewels.