Here's a superb new online slots game from NetEnt you can enjoy playing. Guns N' Roses are heavy metal royalty, selling millions of albums worldwide and electrifying audiences with hits including Sweet Child O’Mine, Live and Let Die and November Rain.  For the first time, the power of the band has been channelled into a video slot machine that will undoubtedly appeal to diehard fans of the band and those less familiar with the five-piece rock gods.

Created to mark the 30th birthday of the rock gods, the Guns N' Roses video slot machine by NetEnt faithfully recreates the energy of the band through this feature-packed game featuring original tracks by the legends themselves.  Join Axl Rose, Slash & co on the road with this five-reel best slot games online featuring a scatter bonus, stacked wild and randomly triggering bonus features, including the rocking Appetite for Destruction wild feature which takes its name from the band’s seminal 1987 album. If you love promo's, get the best UK casino promotions today!

As one of the world’s leading suppliers of digital games and casino software, NetEnt has built up a stellar reputation in the gaming community.  Established in 1996, NetEnt has prided itself on putting the gamer first.  This commitment has led to its rapid growth with the developer now boasting over 700 staff worldwide and an enviable stable of games catering to all tastes.  While there are many to choose from, it’s definitely worth checking out a few of these titles:

It is attention to detail that has made NetEnt into the powerhouse developer that it has become today.  It would have been easy for this video slot to cut corners, but by getting the band on-board, using original tracks and incorporating nice little touches including band members faces on symbols and wilds, the result is something truly special and well worthy of a 30th birthday celebration. 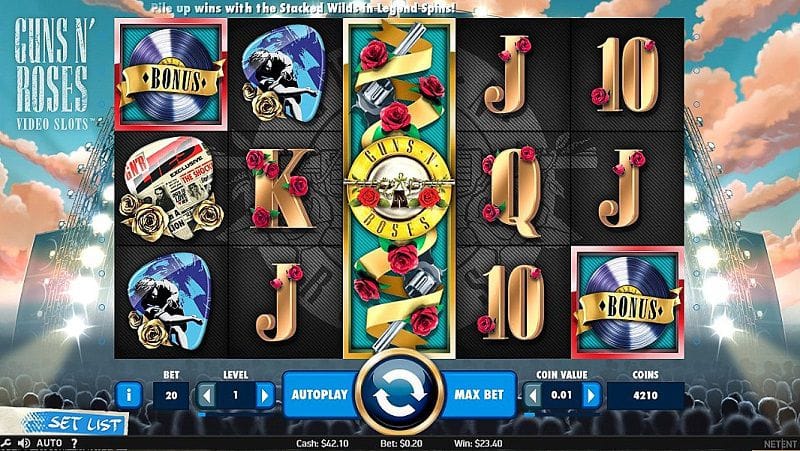 Guns N' Roses slot, taps into the timeless appeal of the band with a feature-laden game that includes expanding wilds, multipliers, free spins and more.  Features have been thoughtfully developed to include original tracks - notably the aforementioned Appetite for Destruction wild which draws on some impressive graphics to give players the chance to win big.

Players will immediately recognise the 5 reel, 20 payline format of this slotalong with the soundtrack taken from the band’s legendary oeuvre.   Classic tracks including Sweet Child O’ Mine and November Rain combine with crisp graphics to deliver a video slots befitting of a band that has dominated the world of heavy rock since their inception.

Bonus Features on this UK Slot

The sheer number of features packed into Guns N' Roses slot is a testament to the effort that has gone into its development.  These include a scatter bonus, expanding wilds, stacked wilds and a list of feature bonuses as long as Axl Rose’s rider.  Here’s a more detailed breakdown of what to expect when you spin the reels:

Arguably the headline act of the Guns N' Roses video slot is the Appetite for Destruction WILD.  This randomly activating feature can appear at any time during normal gameplay.  A rocking wild overlay hovers over the middle reels giving players a chance to scoop huge wins.

Watch out for the scatter bonus which activates when the bonus symbol appears on lines one, three and five during gameplay.  Once triggered, players must stop the spinning wheel to scoop up a Coin Win or activate the Crowd-Pleaser/Encore Freespin feature.

This random feature can activate at any time during play.  On activation, players will be credited with three free spins, each one complete with one or two Stacked Wilds. 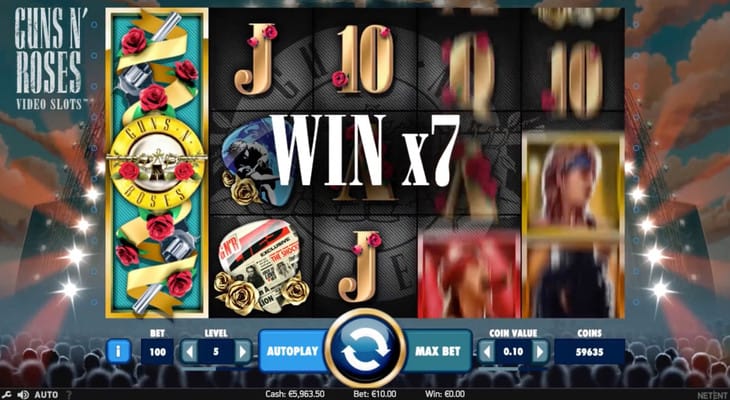 Another random feature, Solo Multipliers can kick in at any point during gameplay (excluding during Legend Spins or Appetite for Destruction feature).  When in play, wins on a specific symbol will be multiplied up to x10.

This interactive ‘Pick and Click’ game gives the player a total of eight picks across three levels of progressively greater prizes.  Players can win more free spins, and those who make it to 800 coins on Level 3 will have their win doubled!

Just when you thought there couldn’t be another feature to unlock, Guns N' Roses slot returns to the stage with Encore Free spins.  Players receive 10 free spins with a stacked wild joining the party on reel two, three or four to increase the chances of winning big.

As well as wowing with graphics, licensed audio and unparalleled gameplay, this video slot also gives players easy access to wagering controls.  Players can determine the number of coins they wish to bet along with the value of each coin to wager between 20p and £200 per spin. 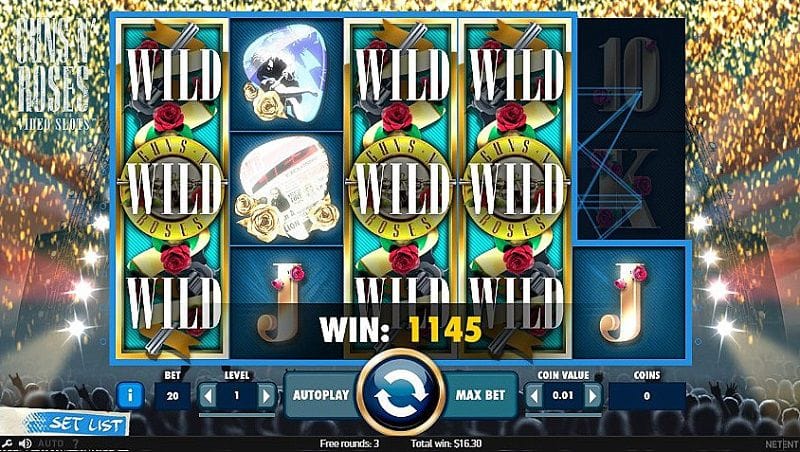 Our Verdict of this exciting Music Slot

In the battle of the bands of video slot machines, this one tops the bill.  The thought and attention to detail that has gone into all aspects of the game, from face-melting visuals to the array of Guns N’ Roses-themed features (most notably Appetite for Destruction WILD, which rocks hard), coupled with swaggering tracks from the band are a fitting tribute to the band.  It also speaks volumes for the authenticity of the game that the band have allowed their music to be used throughout.  The effort that has gone into integrating the gameplay with the band’s aesthetic is something that does not go unnoticed and makes the game stand out from the crowd.

All that said, as with air guitar versus the real thing, this is a video slot machine that needs to be experienced to be fully appreciated.  Thankfully, NetEnt has released versions of the game for mobile devices (iOS and Android) and desktop incarnations simultaneously, so you can let your hair down, get on your Axl Rose shorts and rock out with a few spins on Guns N' Roses slot on any device… welcome to the jungle! If you enjoyed Guns N' Roses Video Slots then you might also like Frooty Licious