Who needs words when you can use emojis? Your favourite smiley, winky and laughing so hard I’m crying face will help you secure big prizes in this great new online slots game from NetEnt. Emojis are everywhere, emails, texts, t-shirts, curtains… poo emoji cushions! What started as a small trend in Japan has well and truly taken over the world and has led to this entertaining and amusing play casino game that we think you’ll love.

Formerly known as Net Entertainment, NetEnt are renowned for making online games that are as engaging and entertaining as they are rewarding. They have rapidly become one of the most popular makers of high spec online slots. The Swedish outfit founded in 1996 was the first online casino developers to use Java and now it uses HTML5 it continues to be the industry forerunner. NetEnt also boasts a progressive jackpot network that has awarded tens of millions worth of prizes since it started.

If you love promo's check out SlotsBaby today. 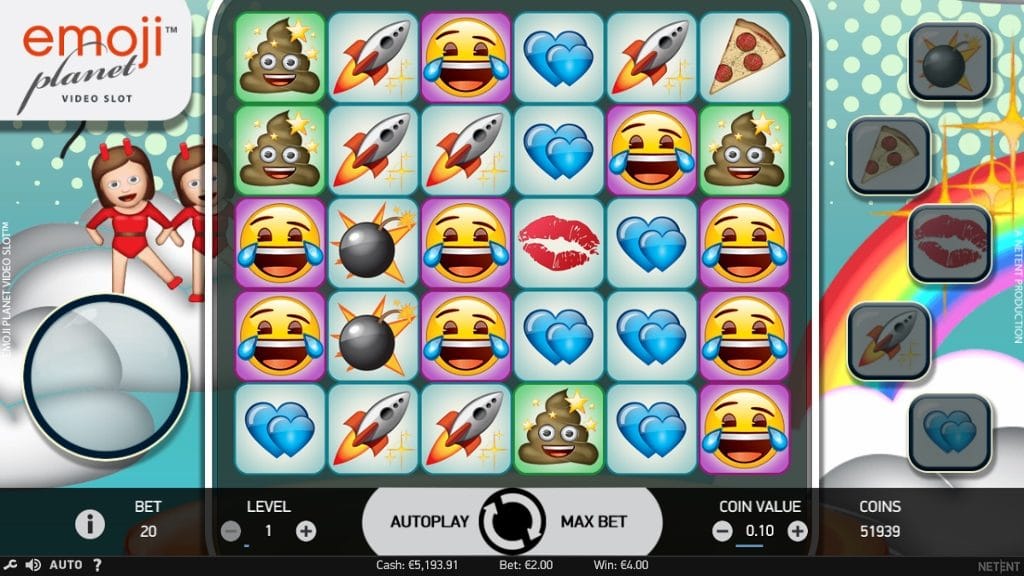 Emoji Planet is an online slot that offers a slightly different format to most. It’s played on a 5x6 grid and doesn’t have any paylines or reels, instead, you are looking to cluster together identical symbols. If you can connect together 5 or more vertically or horizontally anywhere on the grid you’ll win. Obviously the bigger the cluster, the bigger the payout.

All of your favourite emojis are here, and every symbol in the game is emoji themed. You’ll come across 2 groups of emojis, a lower paying group that includes bombs, hearts, lips, pizza and a rocket and high paying symbols including the famous poo, face crying tears of joy and the alien face. 5 in a row of these higher paying symbols will bag 2x your spin bet and up to 500x that if you luck out and fill all 30 positions with one icon. Wilds will also crop up in Emoji Planet and they can replace any symbol to complete a winning group.

You’ll also want to keep a watchful eye out for the cascading reels feature. When you get one or more wins, those symbols will disappear and new ones will replace them. This process can be repeated and the wins will keep rolling until the winning combinations stop!

If you have a single loss though don’t panic! With every win, a meter on the right of the screen will begin to fill up. If you collect 12 of one icon during a spin (and associated wins), the meter will be completely filled and allow you to activate a special power. Next, to the meter, a number will indicate how many of each power you’ve got stored up. So even if it appears your spin has come to an end one of your stored powers can be used and you can keep the emoji action rolling.

There’s also some nice bonus features you may come across:

Pizza: Get a slice of this feature and a 3x3 grid of a symbol will appear - instantly triggering a win.

Bomb: When this blows up 8 random emoji’s will be destroyed and you’ll get an instant prize for every decimated icon.

Rocket: This will launch a stack of 10 wilds to be placed on and above a column in the game.

Kiss: With this, you’ll gain 3 sticky wilds which can be played three times before disappearing.

Hearts: Here your total win will be multiplied by the number of times the heart meter has been filled - plus one. 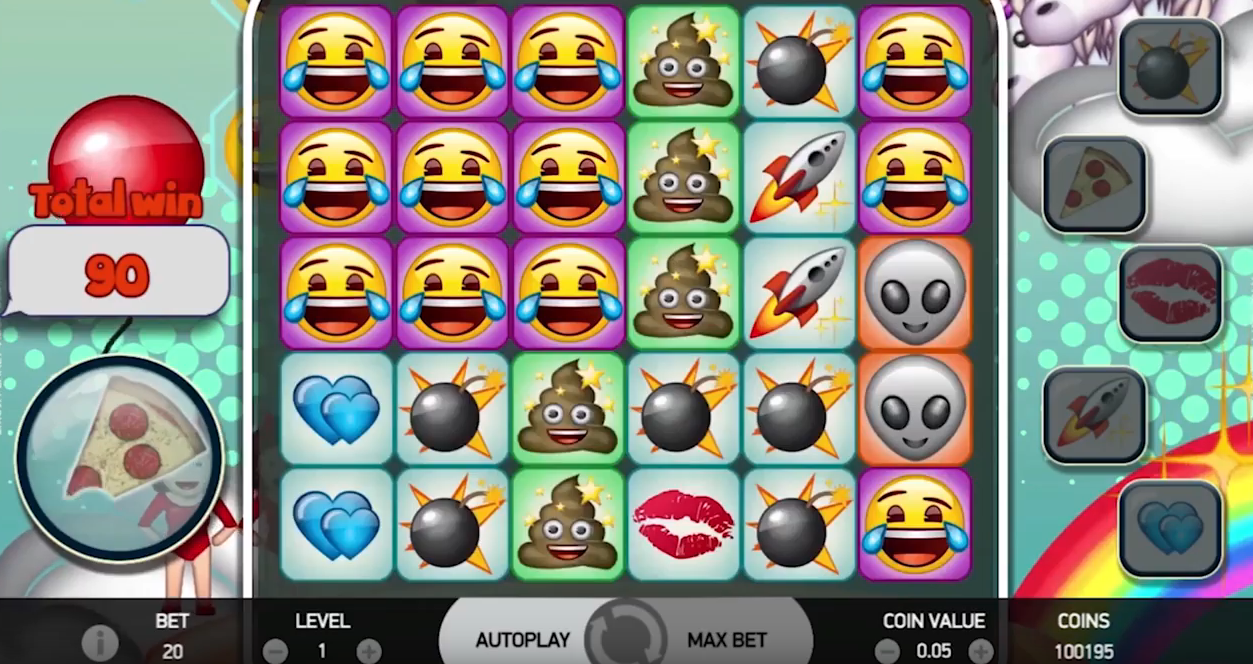 Emoji Planet is a really fun hybrid of social gaming on online slots. It’s a nice simple game to play and will make a nice change for slot players, a good intro to slots for social players and a total crowd pleaser for emoji lovers.