Here's one of the superb new online slots game from NetEnt that you can play. There can never be enough adventure themed slots in the market that is for sure. Many of them take you places you never knew existed or could be experienced from the comfort of your own home. Steam Tower from online developer NetEnt, is quite the adventure. Towers always have some form of the damsel in distress waiting for them. Well, this game has managed to defy those stereotypes instead opting for a much different spin on an otherwise outdated trope. This is a beautiful slot that will take you to 19th century Victoria era of industrial design, where humanity was on the brink of technological change. are awfully bountiful on the internet today. I have grown a bit tired of these types of games really. Like many Slots games, Steam Tower follows the tradition to the line providing a series of different features that are sure to excite with every spin of the reels.

In terms of looks, the Steam Tower defies all other related slots. Its unique take on design and art style have separated it from many other slots within the industry. This is no simple feat with many slots in the market all pushing towards recognition. It is a horse race that never ends with many slots trying to excite in any way they possibly can with a list of features that deviate just slightly from the path to become a potential monopoly. Steam Tower is not just another card in an already full deck, NetEnt is known to push boundaries and this is the perfect example to give if anyone says otherwise. That isn't arrogance, by the way, just simple fact. We delve through so many titles that lose sight of what they hope to achieve that it becomes almost painful to review, Steam Tower was a treat to see for ourselves which is why we are speaking very highly of it with each word in this text. The game features 15 slot machine pay-lines, 5 reels, stacked wilds, and a litany of free Spins which are activated when scatter symbols are unravelled on the reels themselves.

If you love promo's, get the best latest slot promotions now!

In 1996 Net Entertainment was formed in Sweden as an offline casino operator, today NetEnt is one of the leading names in online gaming that now stretches worldwide. The ever-growing list of games that NetEnt have created has, if anything, inspired many other games within the market, this is something that is completely unheard of in modern-day gaming, we're re-inventing the wheel can be difficult when there is already a set path of creating a successful slot. Since its inception, NetEnt has produced over a hundred titles, each with their own significant themes and experiences. These guys are tried and tested and have even stood the test of time itself, over a decade of entertainment and we’re sure there will be decades more to come. NetEnt: the dynasty of the online gaming industry. 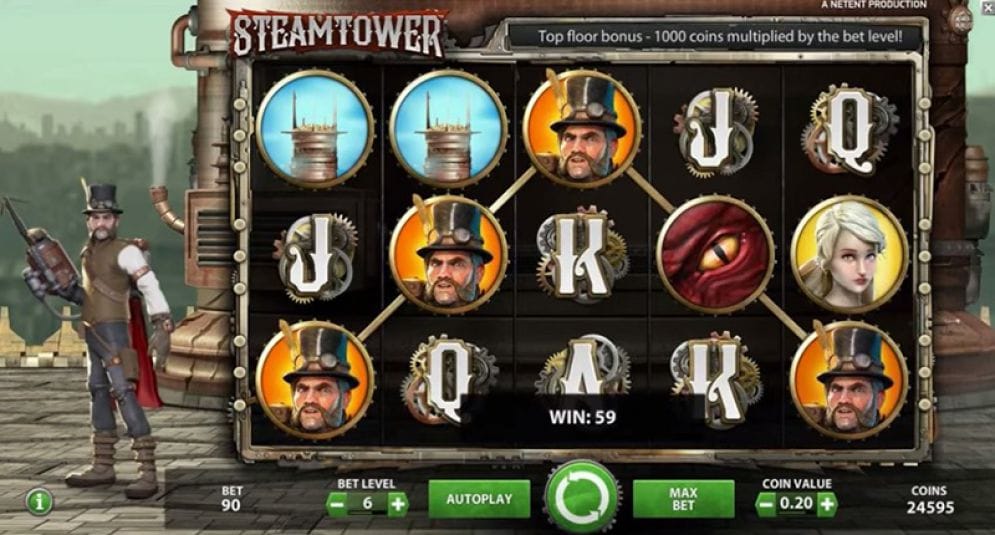 Steam Tower packs the same punch as many other of its NetEnt brothers and sisters. This game is greater than the sum of its parts so doesn’t think that you’ll go into this title expecting a similar, if not identical experience to other titles in the NetEnt catalogue. Steam Tower is its own beast that moves to the sound of its own steam-powered drum. Anyone who’s had the pleasure of running these reels will all tell you the same thing: that this is a definite title to play for yourself even if you aren’t in the market for something new. Your goal on this mission is simple, storm the tower, beat the dragon and rescue the princess, very simple when you think about it. Remember that there is a very wide array of methods to succeed in this endeavour. We’d like to think that we resemble the many heroes of these tales but if anything, we’re the town Cryer who simply shouts out the importance of such a prestigious title.

As we’ve previously stated, this is a 5-reel slot that spreads out its avenues for victory across 15 pay-lines slot that has a minimum starting bet at around 15p which is perfect for those who don’t consider themselves high rollers but enjoy the sweet success of victory. Wild symbols in Steam

The tower will serve the same purpose as most other wild symbols you see in other similar titles: substituting symbols on the reels for potentially higher rewards. The wild symbol will not provide a cash payout, instead, it will only substitute symbols as we’ve already stated. Free spins are more likely to be triggered when wilds are in effect, so although they offer no numerical value, they still serve a grander purpose overall. Wilds can be re-triggered here making them incredibly useful for even higher earnings. For every wild your match in the free games feature, you will earn an additional 2 free spins! A great incentive to keep an eye out for those symbols in particular. If there’s one thing you should take away from this experience, then we hope that you know how much fun this is! 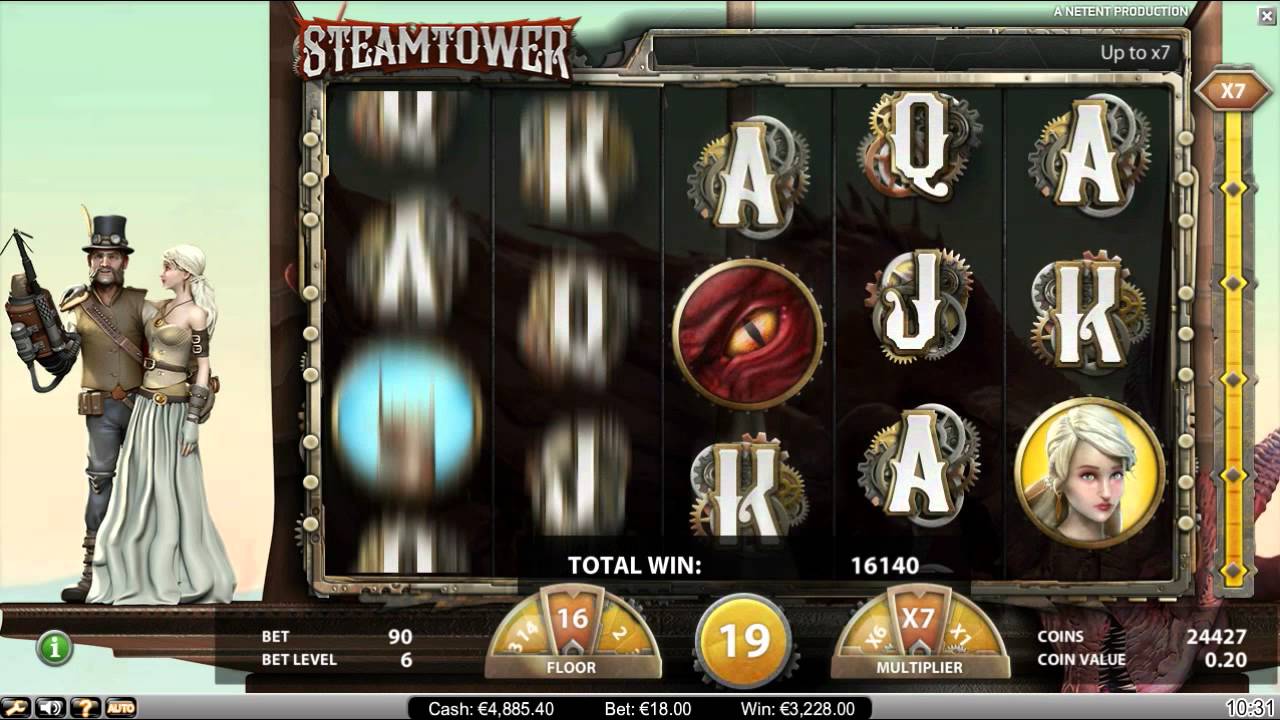 Steam: a gas that was influential in the early days of technological advancements, even today you can’t boil a kettle without seeing the little blighter spouting out the top. If you happen to be a big fan of steam (not the gaming Steam) well then you should try this online slot from NetEnt, as it has lots to see and do with many different levels for you to traverse in hopes of creating some rather handsome cash prizes out of what feels like thin air (see what we did there). There aren’t that many titles out there that are offering experiences quite like this, we thoroughly enjoyed reviewing this game, so it gives us great pleasure to give it a high rating and recommendation. You’d literally be crazy to pass this kind of opportunity up. Remember to keep watch for the dragon, he kind of breathes fire and tends to be in a bad temper, good luck!! 9/10. If you enjoyed Steam Tower then you might also like Volcano Eruption