If you thought the vampire theme was exhausted, think again. You’ve heard countless of vamp stories, but have probably never had the chance to meet with them in the virtual slot game world. Until now. Dark Thirst is a slot game from 1x2 Gaming and it draws from classic vampire tales.

Gamblers will enter a new world of the undead where they will encounter vampire artifacts, vampires out for their blood, classic vampire symbols like a bible, holy water, garlic, bats, a chalice of blood, etc. 1x2 Gaming made this game as spooky as possible so if you are easily frightened, it’s best to have a mate with you during gameplay.

If you dare enter the 5 reel, 25 paylines world of Dark Thirst play slot games in the UK, know that lots of wilds, free spins and more await you. Make note of the special symbols as they can multiply your wins by up to 500x.

Dark Thirst is one of many games by 1x2 Gaming. The company is based in the UK and has been operational since 2003. They have several games in their name, but most agree that their strength is virtual sports. Instant-win games are an area 1x2 specialize in, but they also offer casino games. Its rivals MicroGaming and PlayTech are more well-known. More games from 1x2 Gaming include;

This slot game makes use of the classic horror theme to create a spooky universe that is unlike anything you’ve seen in the slot game market.

While you get into the game you’ll notice the reels are transparent, allowing you to take in the view of a starlit sky with a pulsing full moon shining all its light. An aspect of the design that screams ‘horror’ is the dark and menacing shape of a castle silhouette in the background. The command bar is hidden discreetly on the screen throughout- meshed into the dark blue reel frame. The game does well at setting up the mood.

There isn’t a lot you need to master before going into gameplay because the game has a classic slot game pattern. There are 5 reels and 3 symbol positions. You can bet on 25 paylines and win on the activated ones only. Start by setting a wager and choose which ones to activate.

The list of reel symbols includes holy water, chalice of blood, bible and garlic. These symbols will appear frequently on the reels. Your wager determines your rewards. Don’t expect rewards to go higher than 100x of a wager placed for long combinations. Aim for as many winning combinations with these symbols as possible.

Other symbols are a bat, 2 blood hungry vampires and a set of bloody fangs. These reward up to x500, but it’s hard to spot them so keep alert. 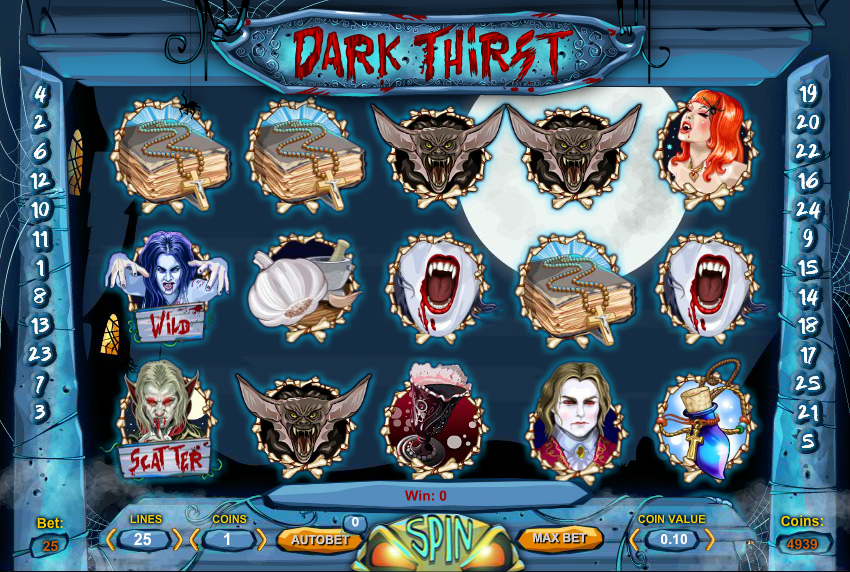 Is there a full moon out tonight? Best way to enjoy it is while playing this Vegas online slot game called Dark Thirst. You’ll love the simple, classic gameplay and the thrill of entering the universe of the undead. Its unique and entertaining graphics also deserve a mention. Give it a chance if you’re feeling lucky, but if you get frightened easily probably don’t play it at night. If you liked Dark Thirst then you might also like  Deadworld