Here's a great new online slots game from 1x2 gaming which you can play.

Almost everyone in the 21st century has imagined a zombie apocalypse. The theme has grown so popular in modern art leading to references in movies, series, games etc. This is probably what led 1x2 gaming to the creation of this best slot games called Deadworld. Deadworld lets you zombie hunters find and kill these blood killers before they find and kill you first. There’s a lot of fast-paced action here that’s going to get you jerking with excitement, so if you are obsessed with the post-apocalyptic then look no further.

Deadworld is from 1x2 gaming, a company that specializes in creating simple speciality games. Their focus is to create games with various bet sizes to give every kind of gambler a chance at winning large. The company has a small range of 5 reel slot games that they call Panorama. Their games are unique in the sense that you can’t find them elsewhere and they incorporate a few elements from sporting games, racing and adventure.

If you love promo's, get the best slot offers today. 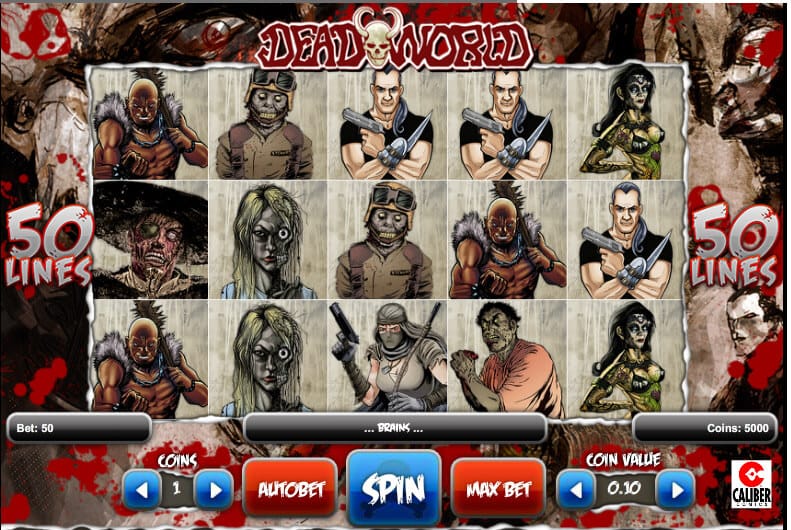 The type of zombies you’re on a mission to kill include Spike, The Mexican, Queasy Rider, The Mummy, and Bikini Girl. These sound like ordinary names, but by the time you’re done with the game you’ll understand just how much value each name represents. The game also has a group of good guys who are on your side and will help you eliminate the zombies. To add on to the action is lightning fast skeletons that you’ll need to track-down.

In a world where the dead have their say, you’d definitely expect lots of blood and gore so Deadworld isn’t a game for the faint of heart. The designs sets the Armageddon aftermath in place with the reels being set against a backdrop of blood splatter. When the background music kicks in, you’ll have that horror movie setting in place which gets you in the zombie murdering zone.

You should set your betting range before you start to hunt the zombies. The stakes start from 0.5 coins a spin. ‘Auto Bet’ feature is used to choose the number of times you want reels to turn with no interruptions on an already set betting range. ‘Max Bet’ allows you to set the highest bet possible and spins become automatic. ‘Spin’ just lets you set the reels in motion.

Start off the game with a warrior mindset because you never know how soon the bloody action might start. It will take seconds for you to come face to face with the zombies, but let your drive to score big be your motivation. Finding them wins you lots of line-bet multiplying prizes.

You stand to multiply your line-bet when you kill certain zombies as follows:

-45x for The Mexican

You can also win by multiplying your line-bet by 750x when you find your team of zombie killers. Tribal the bludgeoner will be your biggest earner. The highest prize in the game is for killing the fast moving skeletons which can multiply your line-bet by up to 1000x. 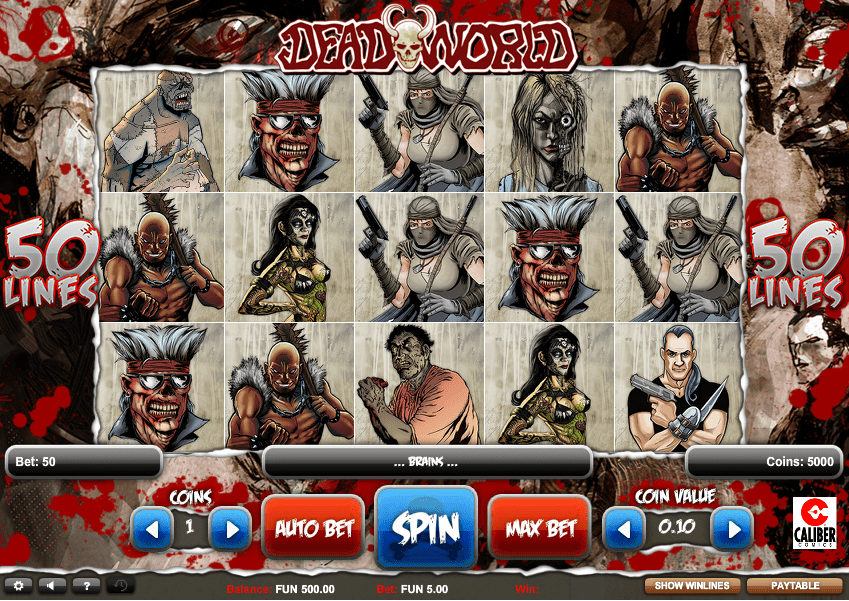 Are you ready to defend the human race? It’s a very unique theme and the action is awesome, so this will be an enjoyable play for many gamblers. In the Deadworld universe, you’re our only hope so go into the game prepared to get dirty and win big while you’re at it. There’s lots of gory action waiting for you on here so come prepared.