Here's a superb new online slots game from NetEnt which you can play. Strap on your armour and prepare for an epic encounter, with Warlords: Crystals of Power online slot game.  It is the eve of battle, and the air is thick with anticipation.  Throughout history, many noble opponents have clashed on the battlefield.  This opulent, mesmerising slots title conjures up the atmosphere of Medieval combat, and is also rich in fantasy elements reminiscent of J.R.R. Tolkien’s Lord of the Rings.  And whatever type of warrior rests within your soul, you’ll feel drawn to this game.  With three distinctive starring characters, each of whom embody different kinds of warrior spirit, the game is sure to have wide appeal.  Samurai are known for being masters of military tactics and Japanese martial arts.  Priestesses are powerful in their manipulation of magic and ancient medicines.  Barbarians are fearsome in their brute strength.  You’ll find all three in Warlords: Crystals of Power.  So, steel yourself to meet a triad of mighty warriors, take up arms, and join them in a fantastical quest for Slots Games supremacy!

NetEnt’s games are strategically developed and expertly executed, making them a force to be reckoned with when it comes to online slots.  They have their own progressive jackpot network which has paid out tens of millions, and have also conquered mobile gaming, with their platform NetEnt Touch. And it’s expansive, self-assured offerings such as Warlords: Crystals of Power that make them known or combining stimulating play with gripping narratives, and realising bold, creative visions in impressive, infinitely playable online slots games.

Some other immersive online slots adventures by NetEnt include:

NetEnt is a developer that can fly its flag triumphantly, and their colours always signify the very best online slots content. Check out SlotsBaby for promo's and bonuses! 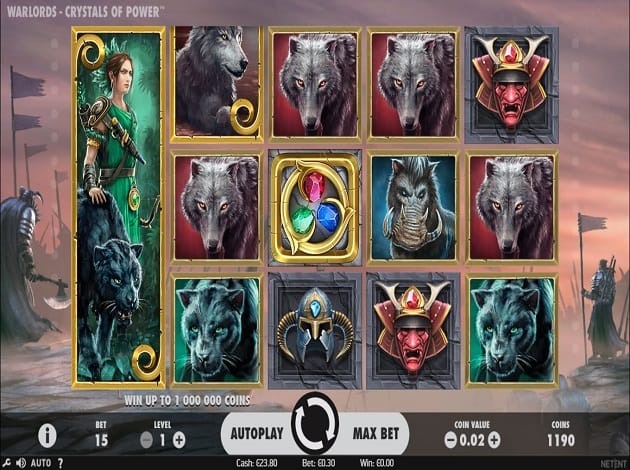 Warlords: Crystals of Power opens with a truly cinematic animated sequence.  We’re introduced to the three starring characters, the Samurai, the Priestess, and the Barbarian, as their respective spirit animals bring them differently-coloured, mysterious, glowing stones.  The animation is exquisite and detailed (you can even see the texture of the skin of the warriors in close-ups), and it’s clear from the outset that you’re about to experience a game of the highest production values.

After a handy screen summarising information on the game’s special features, we get right into the heart of battle, entering the game’s main screen.  The background is a moody battleground, with silvery stone crags underfoot, fluttering standards on the horizon, and in the distance, a striking sky in misty, glowing tones of orange and purple.  To the left and right of the reels stand warriors clad in ornate armour, one wielding a fearsome-looking battle axe, the other clutching a waving flag.  In the bottom right, we can see a stream of brave soldiers continuously marching towards their fate in battle.

The soundtrack is dramatic and stirring, and conjures up the sense of fantastical quests, heroic battles and vast, mountainous landscapes, as in Lord of the Rings.  The musical track is long enough that it’s hard to notice repetition, and contains some thrilling crescendos, taking the player on an emotive journey as they spin the reels. 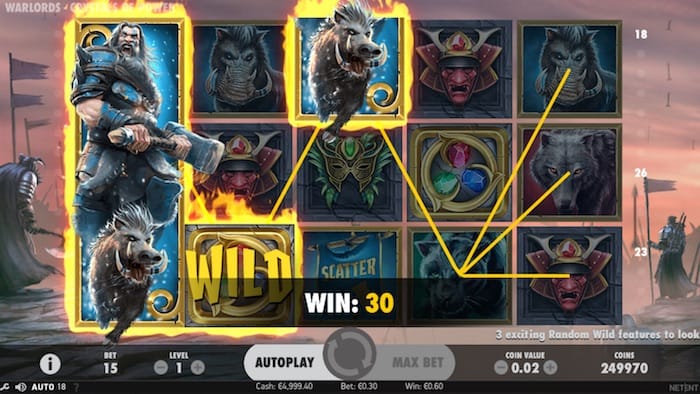 Warlords: Crystals of Power is a magnificent piece of world-building, as well as a gripping slots experience.  Its outer appearance is as sumptuous as a shining set of Medieval body armour, but beneath, there is robust, elite fighter of a slots game fortified with specialised features.  Whether you’re a Samurai, a Priestess, or a Barbarian at heart, you’re sure to find your spirits roused by this splendid NetEnt title. If you enjoyed Warlords – Crystals of Power then you might also like Beauty & the Beast