Here's a superb new online Slots game from Pariplay. Themed around the iconic 20th century comedy trio, this slot game is sure to leave you laughing thanks to its regular wilds, scatters, free-spins, and bonus rounds! Indeed there will be plenty to keep you entertained thanks to the numerous and varied bonuses which themed around each of the Three Stooges, in addition to several Slots games bonus chances such as Whack the Juror and Tag Mix Up.

I really like the eye-catching visuals and retro design – the play screen is modelled as an old-fashioned typewriter upon which the expressive faces of your favourite trio of comedians slip and slide into view. If you love promo's, get the best slot promotions

Pariplay are pioneering game developers, always looking to try something new and different. For instance, they were among the first to capitalise on the potential of social gaming, which led to their hugely successful Crazy Cash Slots on Facebook which now has over a million users!

Video slots are just a small part of what Pariplay do. Their slots are usually fairly similar in their features, and typically feature cartoon-like graphics, so it is nice that the Three Stooges slot offers something a bit different to the rest of their collection.

Some of their other popular games, which are definitely worth a try, include Easter Cash Baskets and Tiki Madness.

This is a twenty five line game, with a fixed bet on each line. Playing all twenty five is compulsory. You can choose to bet 0.1 to 0.5 credits on each line, meaning a maximum bet of 12.5 credits.

Scatters – there are three scatters: Larry, Curly, and Moe. If you get three or more of the same Scatter on screen at any one time, a bonus is triggered! Three scatters gives you 10 free games, 4 gives you 20, and 5 gives you 25. There are also three different bonuses tied to each character – Moe Money, Curly Cash, and Larry’s Loot. Finally there are also bonus games such as Whack-the-Juror and Tag Mix Up. These many different layers make for a diverse and interesting game which is sure to keep you attention!

The free slot version also features a Progressive Jackpot, which can be triggered completely at random at any point! 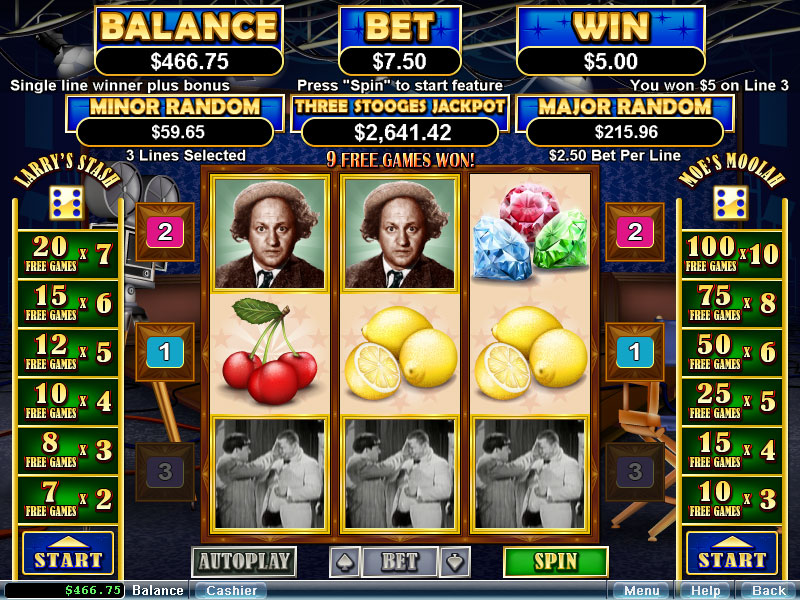 You are sure to end this game chuckling thanks to its frequent scatters and wilds, which will secure you free game after free fame, and access to large multipliers! It is an equally entertaining slot to play for free. Fans of the hit slapstick show will enjoy seeing the expressive faces of the dynamic trio bouncing on and off their screen. However, it is a testament to the game that even those unfamiliar with The Stooges will find themselves entertained by this diverse and multi-layered game! If you enjoyed Three Stooges then you might also like Move your Ass