Some of us may remember the psychedelic Sixties, while the youngers amongst us might find fascination in the retro styles, music and television of this bygone decade.  Whether you’re a nostalgia-seeker looking to relive your groovy memories, or part of a new generation hoping for a glimpse into this colourful part of our recent history, this Online Slots game is sure to delight you.  It’s as cool, slick and capable as Austin Powers, too, when it comes to play, winning chances and bonus features.  So power up your mojo, set the record spinning, and prepare to get down, with Groovy Sixties Online Slot Game.

NetEnt might be called The Beatles of the online casino world, considering the number of massive hits they’ve had with slots titles over the years.  This Swedish company have a track record of great success as online casino software providers and have cemented their reputation as giants in the online slots universe in many places across the globe, including the UK and many parts of Europe.  Some of their visually stunning and cinematic slots titles include:

If you love promotions, check out SlotsBaby today. 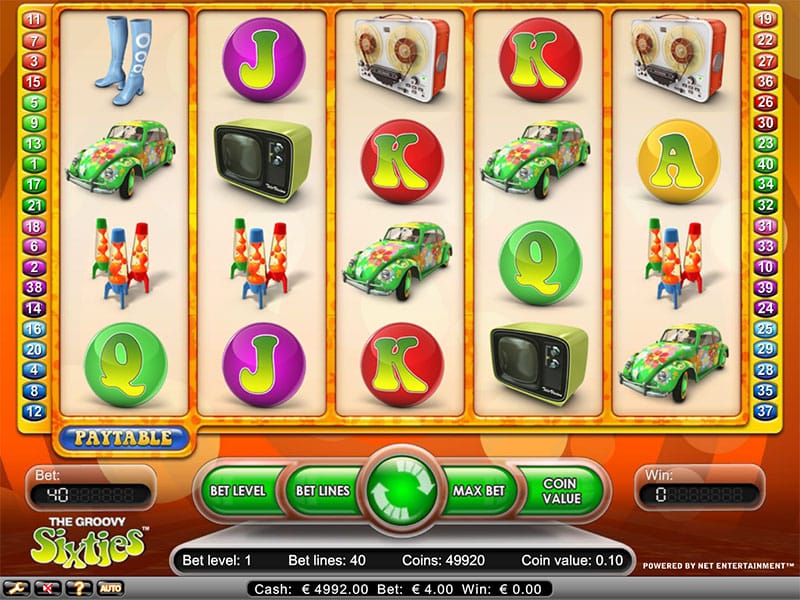 The look and feel to Groovy Sixties slot is a psychedelic feast for the eyes. The background to the reels is suitably Sixties, with swirling patterns of orange and yellow.  It’s aesthetically pleasing but simple, which gives centre stage to the highly-detailed, photo-realistic selection of symbols on the 5 reels.  These include lava lamps, retro green televisions, 60s-style long blue boots, and old film projectors with reels of film, as well as J, Q, K and A symbols in classic 60s bubble writing against different bright colours.

The background music is a rock-and-roll style track, reminiscent of ‘The Monkees’ or ‘The Beatles’, that’ll have you tapping your toes as you spin the reels.  Sound effects are perfectly in-keeping with the era.  When the reels spin, there’s a sound like a film projector winding, and wins are accompanied by bursts of 60s style music, such as organ riffs.

A handy selection of prominent buttons below the reels allows you to alter your bet level, bet lines, max bet and coin value, making for an accessible user interface.  As is typical with NetEnt games, there’s also an Autoplay feature, which allows you to sit back and watch the reels spin as you enjoy the 60s soundtrack. 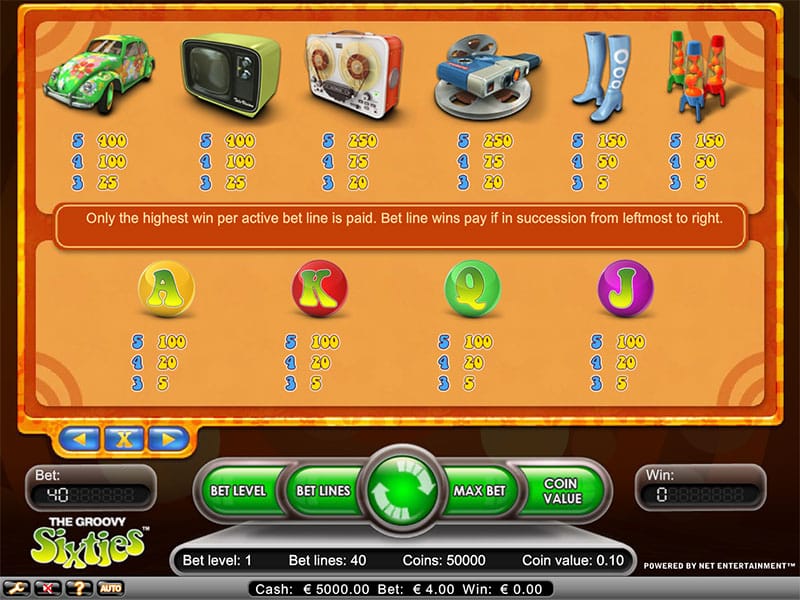 This game is visually trippy, bold, bright and brilliant.  The quality of its graphics is also reflected in its absorbing gameplay, and though the bonus features are few and simple, they are effective, and keep gameplay rolling along as smoothly as a classic LP.  This game is groovy, baby!