Who doesn’t love pandas? These cuddly monochromatic bears are known for their cuteness, but you’ll meet a cheekier side to them in this game – keep an eye out for the escaped panda who will turn symbols into wilds!

Players are sure to feel nostalgic for childish days at the zoo thanks to the enticing background which features a cascading waterfall, viewing platform, and even an ice-cream stand. An immersive backing track of cooing birds adds to the sense that you are at one with nature! See more great games here: SlotsBaby

If you love promo's don't forget to check out our top casino promotions.

Established in 1999, the London headquartered Nextgen is an established veteran of the online casino scene. In fact, some of your favourite games might be of Nextgen origin without you realising – a B2B approach means they have licensed many of their games to bigger brands.

Unlike companies such as NetEnt, the appeal of their games lies in their unique special features rather than ground-breaking graphics. For example, their popular Crocodopolis game features a unique Slide-a-Wild feature, and Unicorn Legend includes an unusual Select-a-Play function. Players can look forward to similar exciting features in Pandamania, such as the Pick Me round and Pandas Escape bonus!

Despite the seemingly idyllic zoo the pandas are in, they are trying to escape! As such, some of the biggest wins are related to the tied up zoo keeper – two of these symbols will win you 3x your stake, three will secure you 25x, four wins 250x, and five of them earns you 500x!

These pandas are also pretty partial to ice cream, so the ice cream vendor is also a valuable symbol: lining up 5 of them secures you 200x your stake.

Scatter – watch out for the ‘Pandamania’ sign which will trigger your scatter bonus. Get 2 to 5 of them to win between 1 – 100 times your stake! 3 is your lucky number though, as 3 of these symbols also activates 10 free games, and during these games winnings are doubled!

The Escaped Panda symbol may appear at any time, and will reward you for your assistance in planning their escape by turning other symbols into wilds, helping you to increase your winnings!

Keep a close eye on reels 2, 3, and 4, because this is where the ‘Pick Me’ bonus symbol will arise at any time. It’s a win every time with this symbol – click it to reveal a prize of either ‘cash prize’, ‘cash prize and pick again’, or ‘win all’! 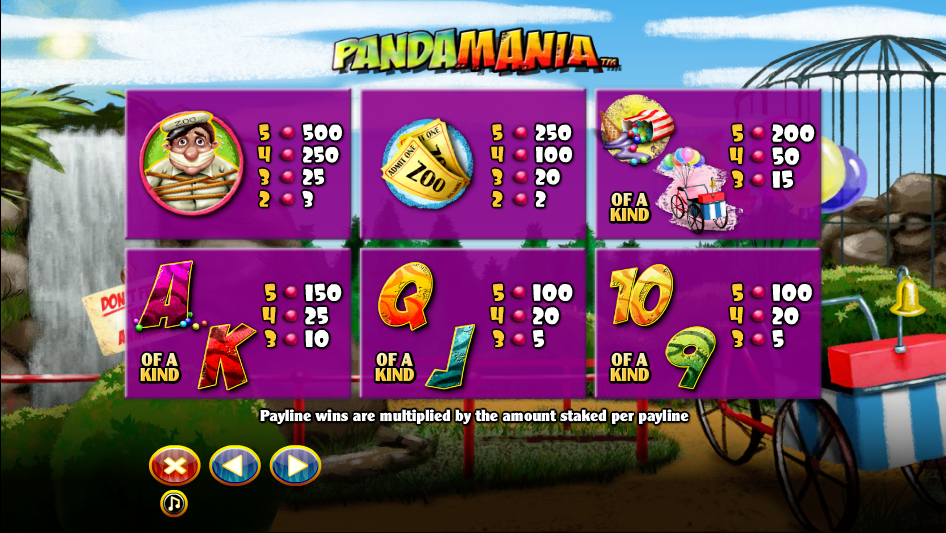 This slot is great fun thanks to its imaginative theme, cheeky leading characters, and immersive backing track. Players are sure to have a smile on their face as they help the pandas round up the zoo keepers, pausing for an ice cream on the way. As with most Nextgen games, the unique bonus features, such as the Escaped Panda bonus and Pick Me round, are a key part of this game’s appeal.

With nine different per line stakes ranging from 0.01 to 2.0 this game can be enjoyed by anyone, regardless of your budget! If you enjoyed Pandamania then you might also like White Wizard.