Here's a great new online slots game from 1x2 Gaming that you can be playing.

No one dares to anger the Gods. They are immortal and higher beings who control the forces of nature, the universe and human endeavours. The twelve Olympians rule everything under the sun and answer to Zeus alone. Strive to please them and if you dare not, you’ll end up banished to Hades’ Underworld.

As players would expect, this game by 1x2 Gaming is set in ancient Greece. There are many other games with this similar theme so in this article, we will investigate what/if this one stands out. It has that classic slot game feel with 5 reels and 20 paylines. The 20 aren’t set like other slots in that you can select a line between 1 and 20. Choose a given coin amount and value to get your total stake for the slot. If you love promo's don't forget to check out our best slot offers

Check out our entire list of slot games here at SlotsBaby.

1x2 Gaming is known for their simple approach to games. They don’t like to make their games too complex, so that each and every gambler can have an opportunity to sample their creations.

They don’t usually have highly innovative games. Instead, their focus is usually virtual sport betting games that promise instant rewards. If you’re looking for slot games to start off with in your world of gambling then theirs are a good choice. 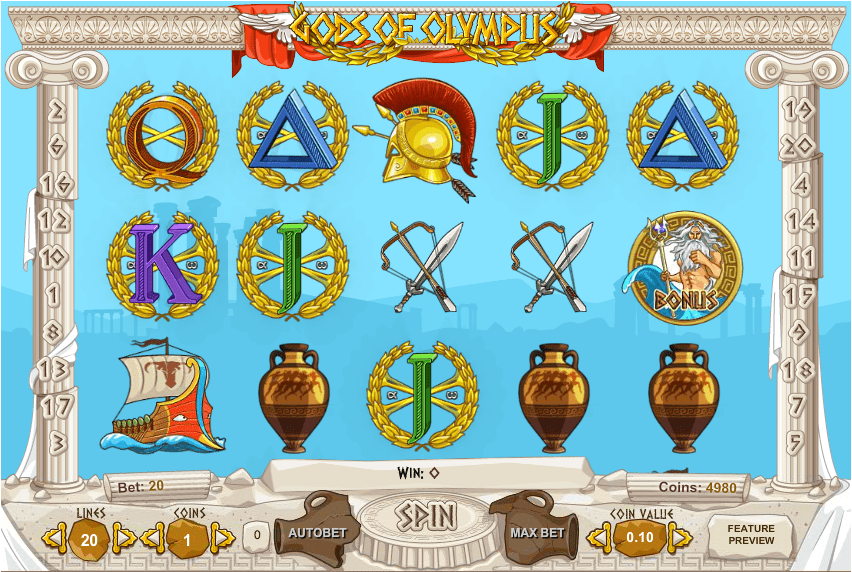 The developers really banked big on the aesthetics here. The first thing that gets you in the opening sequence is the ancient field animation with mountains in the horizon. You can see the pillars in ruins- signs of early Greece. Some of the pillars look broken while others lie on the grass. In the background you can start to hear the game’s soundtrack.

Once you get into the gameplay, the slot is set against the same background as was in the opening sequence. The backdrop is now a blue looking silhouette, the pillars making up the frame don’t look as good as they previously did. There’s nothing too exciting going on in the graphics department here. Even the symbols look just okay.

Gods of Olympus slot has a free spin round and a pick 'em round for instant cash prizes. Other special features include;

There’s nothing particularly attention grabbing from this game. The graphics are basic, there’s more they could have done with the theme and gods and the rewards are pretty standard. It’s not the kind of slot game that will have you fired up to play it, but it’s good for beginner gamblers. The only highlight would be the regular wins. If you don’t like to spend too much time on playing features, give this one a go.