Gems Odyssey is an online slots game by software developer Skillz Gaming. It is set in outer space with glistening gems around the atmosphere. It’s a colourful spectacle that and a straightforward premise.

The online slots game offers Jackpots and Bonuses that will help to boost your winnings at SlotsBaby. Gems Odyssey has a 5X5 grid system with a betting range of £0.60 to £100. It is also mobile compatible so feel free to bring along this portable universe with you wherever you go. If you love promo's, visit SlotsBaby today.

Skillzz Gaming was founded in Israel by 3 gaming enthusiasts, in the year 2014. During their short time in this highly competitive gaming industry, they have managed to secure contracts with 3 major game distributors and casino operators in the United Kingdom.

The brilliance of Skillzz Gaming is reflected in their name itself. Their games require skill. They’ve brought together the adrenaline of the uncertainty in gambling but they’ve managed to remove the frustration from it. Their games do give players control on how the game unfolds. So it’s both luck and skill, making it quite different from the games’ of their competitors. Some of their games include:

The game opens with a retro outer space feel. A little bit like the opening of Star Wars but it soon switches to resemble the ever-popular old school video game, Space Invaders. It’s very colourful and vivid, with a variety of gems dotting the sky. The beautiful gems come in all colour and shape. Some of them are: emerald, sapphire, turquoise, ruby, garnet, etc.

This game lets you drift through the vastness of outer space with a view of colourful gem stones. All of these gems are not only unique in colour and shape, but also their multiplier value. The garnets have the highest multiplier value of 10x, while the lowest are the rubies with 0.2x.

The online casino slots game follows the same model as all slots game – landing 3 or more similar symbols in a row forms a winning combination with which you can claim your prize. Gems Odyssey also offers a Jackpot as well as in-game bonuses.

The most prized jewel in this slots game is the Nebula, which will give you the highest returns. So just sit back and watch the gems sparkle and spin away until its time to cash in on the prizes. The RTP is 94.50% so chances are you will walk away sparkling like the gems. 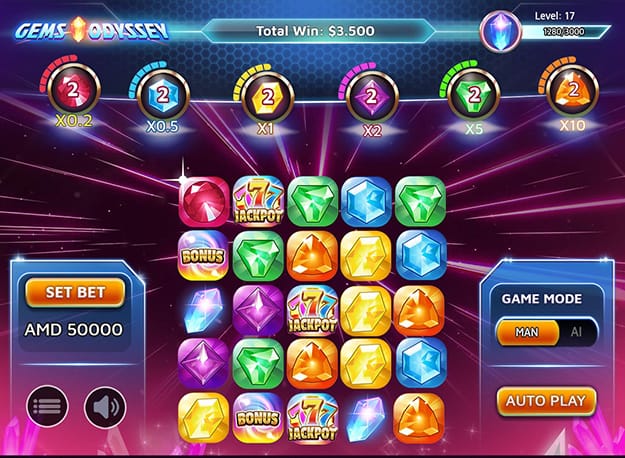 Gems Odyssey is a simple online slots game that anyone can follow. It takes you a spin around outer space and amongst sparkling gems. It is a pretty sight and provides for a good escape from earthly pains. The gems have specific multipliers that will increase your winnings significantly and on top of that there is a Jackpot waiting to be swept away. Overall, Gems Odyssey is a regular slots game that keeps things simple and to the point. If you enjoyed Gems Odyssey then you might also like Wild Hunter