Gamma Girl needs your help to save the world! Join in a battle against evil and she’ll handsomely reward you with some awesome cash prizes and fun gameplay along the way in this Eyecon test new slot games. 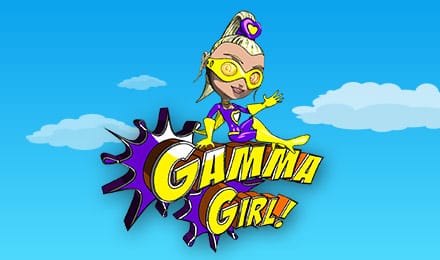 Eyecon is an Australia-based software company that has been developing outstanding land based and online games and multimedia since 1997. Eyecon has a wide portfolio of over 70 games, including its popular Fluffy Favourites.

This is one online slot that comic book fans are going to find difficult to resist. Gamma Girl is a kick-ass character, a superhero ready to take on the world, with a little help from you. Ultimately Gamma Girl is a classic 5 reeled slot but sleek graphics, comic book styling and extra features make it a cut above most others on the market. 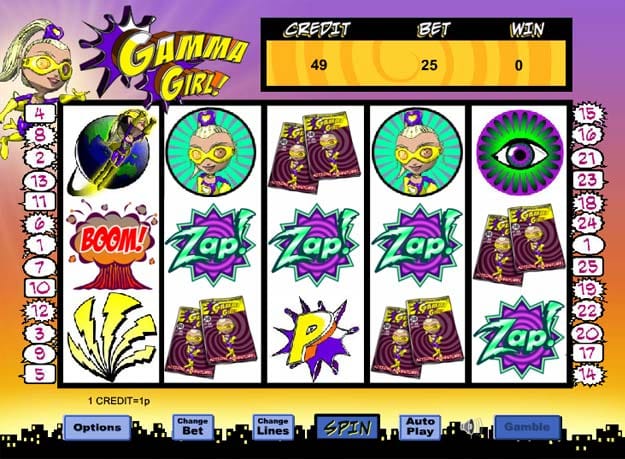 So the 5-reels are played alongside 25 individual paylines, so far so standard, but you’ll soon see the high spec symbols you’re playing with are anything but. You’ll be playing with cool action figures and classic comic book slogans like ‘Zap’ and ‘Boom’ – big fun and big prizes to be won when you get three or more of the same symbol on a payline.

Gamma Girl won’t let the action stop there though, there are bigger battles to fight and bigger fish to fry in the games bonus features:

Gamma Girl – If you’re looking for the wild, look no further than Gamma Girl herself. This kick ass wild will take the place of any symbol (other than the scatter) to help you achieve a winning line. And she’ll do all this in her own inimitable way, with some cool graphics and engaging visuals.

Fire symbol – In Gamma Girl when the fire symbol hits, you’re onto a winner. This huge symbol is the scatter and is the key to unlocking free spins when it appears 3 or more times on your reels. It can appear anywhere on any reel and will also trigger a bonus mini game where you need to extinguish fires to get some free games and multipliers.

Gamma feature – The Gamma symbol triggers another special feature when you’re lucky enough to land 3 or more of these symbols on your active reels. The Gamma feature is basically a simple match and win affair and you get to choose from a 12 square grid and try and get a matching pair. When you do you will generate some pretty decent multipliers. 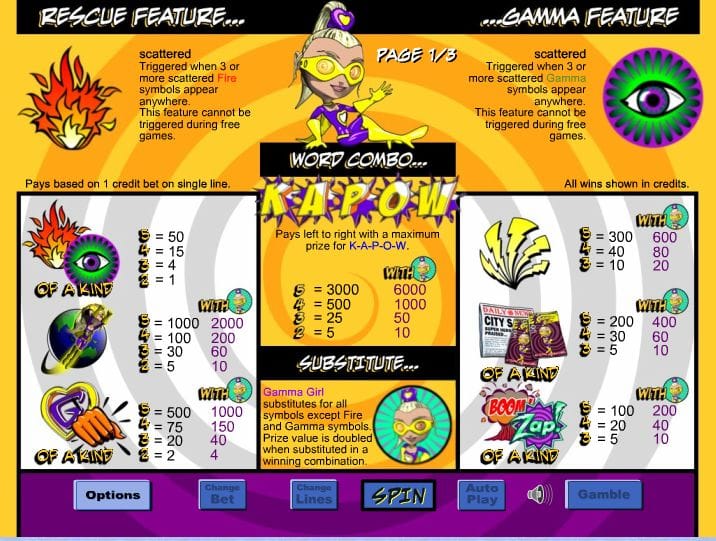 Let’s be honest some online slots really aren’t all that much fun, the graphics and design are just padding for the grid of the game but Gamma Girl is in a league of her own. The visuals and gameplay are top notch and it’s almost as much about the playing as the winning. Eyecon has taken the comic book trend and run with it in spectacular fashion, with awesome pop out animations, ace fonts and a lead character you can really invest in. That’s before you factor in the great multipliers, wilds and ultimately wins you and Gamma Girl can get when the forces of good all come together for you.