Here’s one online slot you won’t be able to wrestle yourself away from! If you love wrestling and you’re looking for an all action slot that offers big moves, big laughs and big prizes, get your Nacho Libre on and get those reels spinning. Check out our entire list of online slot game now.

iSoftBet is a leading gaming developer well known for creating action packed online titles including the popular Platoon games. ISoftBet is rapidly becoming one of the top developers in the online casino field. If you love promos, get the best Slot promotions today. 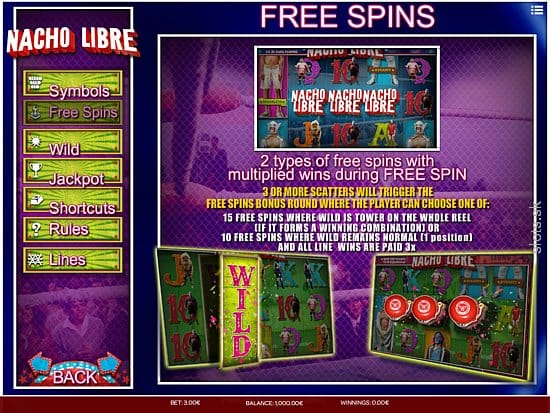 Nacho Libre as you might expect has a wrestling ring for its backdrop and has all the fun of the Jack Black comedy it’s inspired by. When the game starts you’ll see a very chunky competitor in all black facing an altogether more prepared looking wrestler, we all know who is going to win that fight and this is a game that doesn’t take itself too seriously, it’s a pretty funny game all round.

That’s not to say there aren’t serious prizes to be won. There are 5 reels and 10 paylines on Nacho Libre and all 10 will be in play on every spin – you can’t choose the amount of lines in play like on some similar slots. However, you do get to select your line bet amount and coin value thus your total wager for each spin.

On your reels you’ll find 5 kick ass wrestlers in the form of Dynasty, Sage, Esqueleto, Rosales, Ramses. These comedic characters are decked out in masks and outstanding spandex outfits. They make the standard casino cards that join them look pretty dull by comparison! 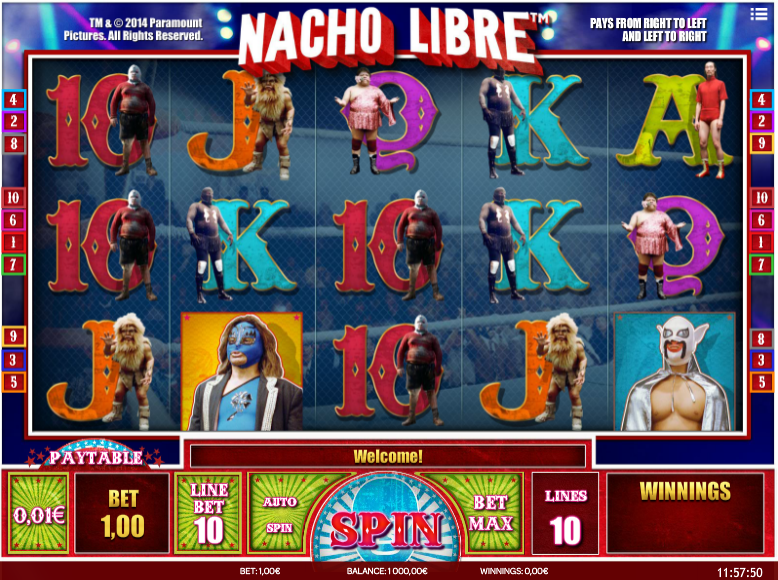 Unlike some slots you can land a win by getting 2 or 3 symbols on the win line, which does seem pretty generous. The three symbols that will get you a win for 2 in a row are Ramses, Sage and Rosales, and as you’d expect they also provide the big prizes: 1000 coins, 750 coins and 750 coins for 5 in a row of these. You’ll get 250 coins for getting a full house of Dynasty and Esqueleto.

It’s enormous fun playing with an landing these wrestlers on the reels, with the roar of the crowd in the background, but the real action kicks in when you hit on some of Nacho Libres bonus features:

Red Bell wild – Keep an eye out for the Red Bell symbol, the bell that calls wrestling rounds to a close, as this is the wild that can replace all symbols bar the scatter. This heroic wild will also attach a 2x multiplier to every win it helps you achieve, nice.

Title scatter – Watch out for the title logo as this is the Nacho Libre scatter and if it appears 3 or more times on your reels then a free spins feature is heading your way. If you land this you’ll get an immediate cash win and also given a choice of 15 free spins with the wild covering the whole reel or 10 spins with a standard wild and a 3x multiplier.

Nacho Libre is an awesome slot! With oversized symbols, hilarious characters and nice twists on the bonus features it will keep players engaged and definitely entertained. Keep your eye out for the 5 in a row feature and that Red Bell wild.