Foxin’ Wins a Very Foxin’ Christmas is a Christmas-themed online slots game with an aristocratic fox. You may recognise him from earlier slots Foxin’ Wins, and Foxin’ Wins Again. Foxin’ seems to be good at winning and NextGen has featured our furry friend yet again in this new series.

The video slots game has 5 reels, 25 pay lines, and it is playable from as little as £0.25. It offers several bonuses such as the Wild and Free Spins, and also features like Superbet and Random Wilds that will cost a little more per spin but may just be worth your while when playing Slots games.

NextGen Gaming is one of the pioneers of online casino games development but you may not see their name as often as some of the other giants in the industry. NextGen Gaming tends to integrate with other prominent software providers and developers, and the distribution of their casino games are often times under their partners’ profiles.

Although their name does not appear as frequently as others, they are not to be underestimated, as they truly are the Next Generation of Gaming. Some of their popular online slot games include:

If you love promo's, get the best top casino promotions. 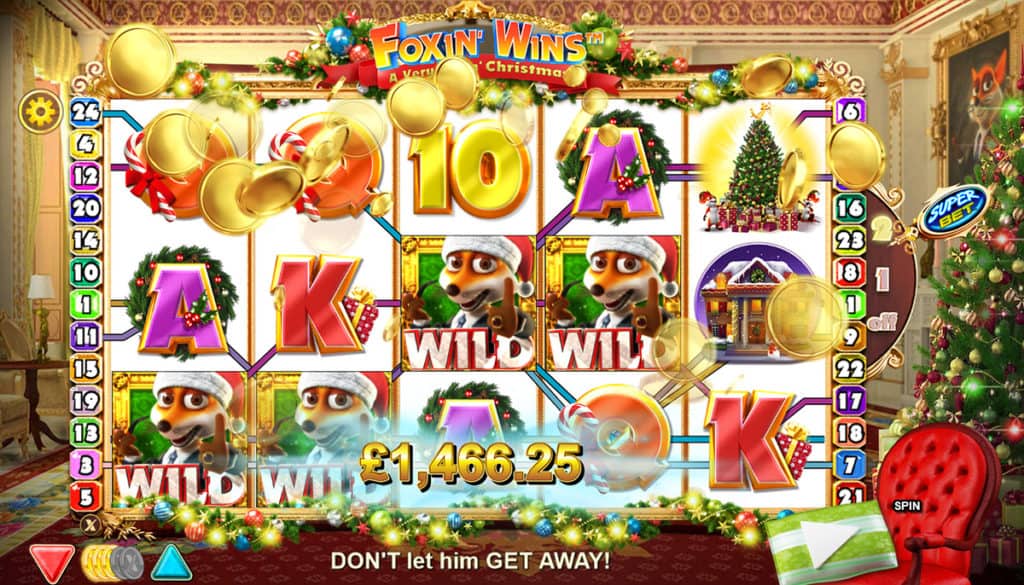 If Christmas was not theme enough, NextGen decided to mix it up with an aristocratic fox surrounded by luxurious items and an indulgent lifestyle. The background of this online slots game is a beautiful and massive living room that spots a self-portrait of Foxin’ himself in a gaudy gold frame.

The symbols are used for this online casino game are the standard 9 to Ace playing cards for the lower value symbols, and festive and opulent items for the higher values such as a sports car, a Christmas tree, Foxin’s very own currency,
and several more.

Foxin’ Wins a Very Foxin’ Christmas also has several bonuses and features throughout the game. In addition to the conventional Wilds and Scatters, it also has Superbet and Gamble features.

Foxin’ in his Christmas hat represents the Wild symbol in this online slots game. It can replace all other symbols to form a winning combination with the exception of the Scatter.

The Pots of Gold represent the Scatter symbol in this online slots. When 3 or more of these Scatters appear on the reels, the Free Spins round is triggered. You get 10 Free Spins during which all the winnings are doubled, and there is also a possibility of re-triggering the Free Spins. The cute little fox pups also appear more regularly during this round giving players bigger wins. 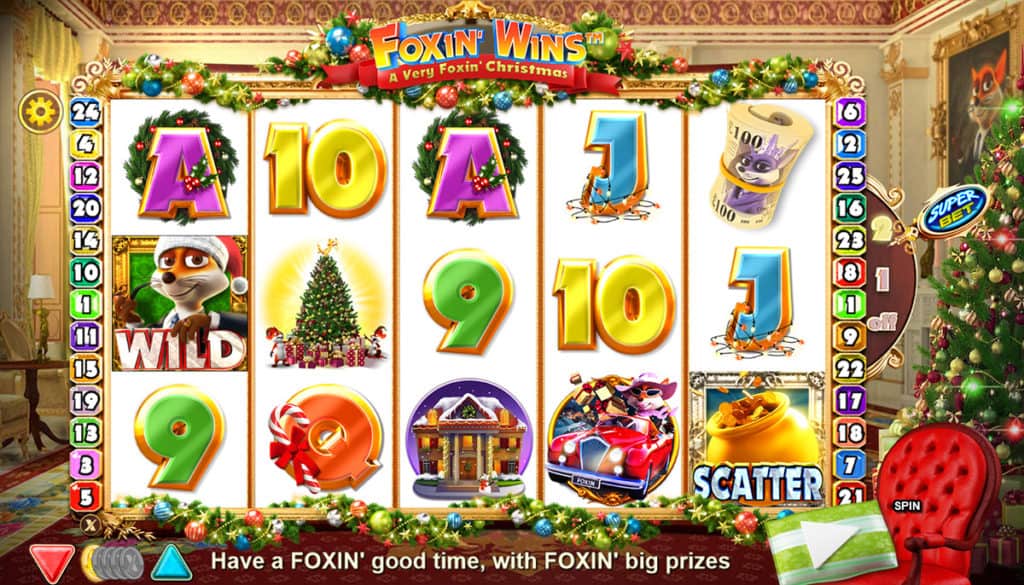 There is an option of placing an additional bet if you’d like to modify the lever. If it is not switched on, the regular game provides just 1 fox cub that appears on the 3rd reel. The cub allows you to convert random symbols wild. However, if you place a Superbet, you’ll get more pups that appear on the 2nd, 3rd, and 4th reels. The minimum bet increases with the Superbet activated but it also increases your chances of scoring greater wins.

Our affluent furry friend experiences bouts of generosity and at random showers players with gold after any paid spin.

This is another random bonus round though a little bit of a misfit – we seldom see a Fox and Leprechaun duo. Foxin’ appears eager to catch the Leprechaun and if he does manage, you will have a decent bonus coming your way.

Foxin’ Wins a Very Foxin’ Christmas is a colourful, festive, and adorable online slots game. There are plenty of bonuses to cash in and it is great having the option of placing Superbets to increase your wins. If you enjoyed Foxin' Wins Christmas then you might also like Lucky Leprechaun.