Here's a superb new online slots game from NextGen Gaming you can play.

Imagine yourself as royalty in the heart of Ancient China. Your bedroom walls are covered in oriental tapestry, your gardens outside are layered with colourful lotuses, and your game board is covered in fortune and gold.

That's what many casino players feel like when they play one of Nextgen's most loved games, Emperor's Garden. There are many games that embed the traditional Chinese theme, but there aren't a lot that get their players so hypnotised and immersed in them like this online slot game.

With the collection of Chinese calligraphy and koi carps that can give you the fortunes that you're looking for, Emperor's Garden can make you get in touch with the mystical culture of the old Chinese Dynasty. If you love promo's don't forget to check out our play slots with bonus spins

Ever since the first day that they started to bring great ideas together and produce mind-blowing games, Nextgen is motivated to wow their players and make them return to their products time and time again. The developers behind the name have been on a road of producing games that can be accessed through multiple platforms, which also allows them to step outside their comfort zone and see how they can create new games that can be integrated with 'the next big thing'.

Since the 20 years they've been developing and publishing games for both land-base and online casinos to enjoy, they have made a mark in the industry by creating games such as Samurai Split and Golden Mane, as well as Emperor's Garden. 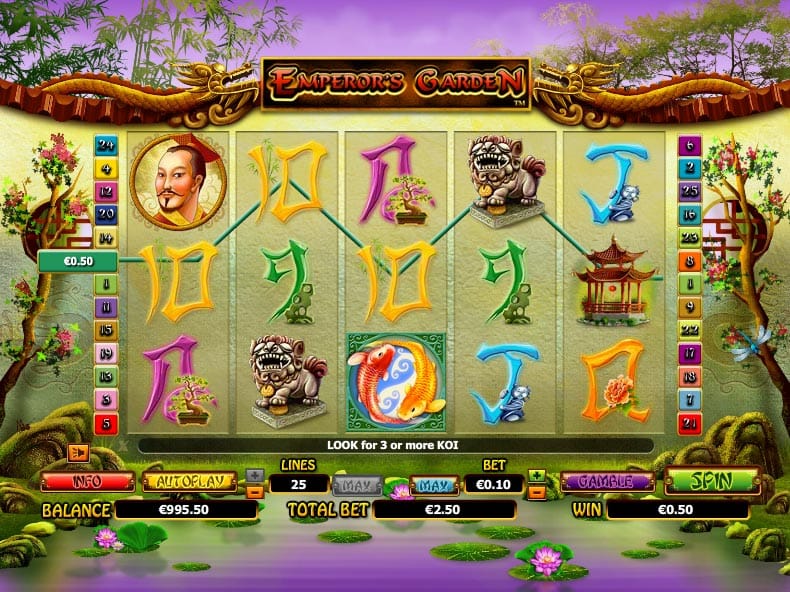 With 5 reels, 3 rows, and 25 pay lines, take your place as the emperor and wander through the oriental gardens where you'll be presented with WILDS and SCATTERS, which are interpreted as the Garden and Koi symbols. So what happens when these WILDS and SCATTERS appear on your screen?

Whether you make a bet of 1p or £50, you can be sure that your garden will grow and bloom into a floral paradise fit for an emperor! 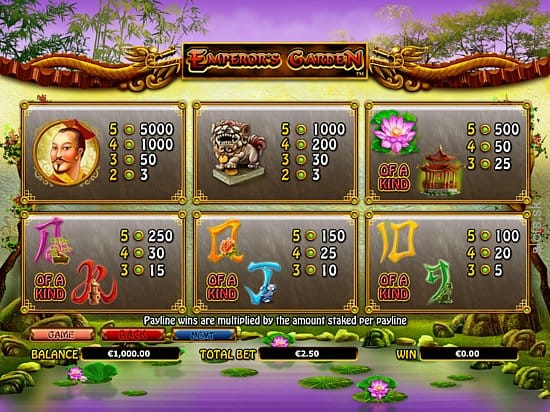 At least once in everyone's life, they want to know what it feels like to be a grand emperor surrounded by oriental tapestry and decorations in Ancient China. The grand slot game, Emperor's Garden, allows every player at all skill levels to step inside the botanical world, set their stakes, and watch their bets multiply right before their eyes.

And because the developers behind Nextgen are such great masterminds, this slot game has an RTP rate of around 95%, a rate that not even the Emperor himself could turn down. If you want to feel like royalty today, load Emperor's Garden on your laptop, tablet, or smartphone today, and see if the garden and koi symbols float across your screen! If you enjoyed Emperor's Garden then you might also like Adventure Palace