An alchemist is someone who can transform things through a magical process. The idea dates back hundreds of years but traditionally around transforming simple objects into valuable ones. Sound familiar?

Join in on the mystical theme of potions and wizardry that can cook up an answer to all your problems. The chief alchemist will take you on a powerful journey into his secret workroom where he creates the spell binding and magical potions that have the power to whatever you wish for. Be enchanted into a dimension of great mystery that also heralds some great winnings.

This theme never gets boring and is a theme for both young and old. Just look at some of the times most classic literature, media and of course gaming. What is particularly enchanting is the imagination of this game which lets its players join in on an unknown world and get lost in the essence of the magic. 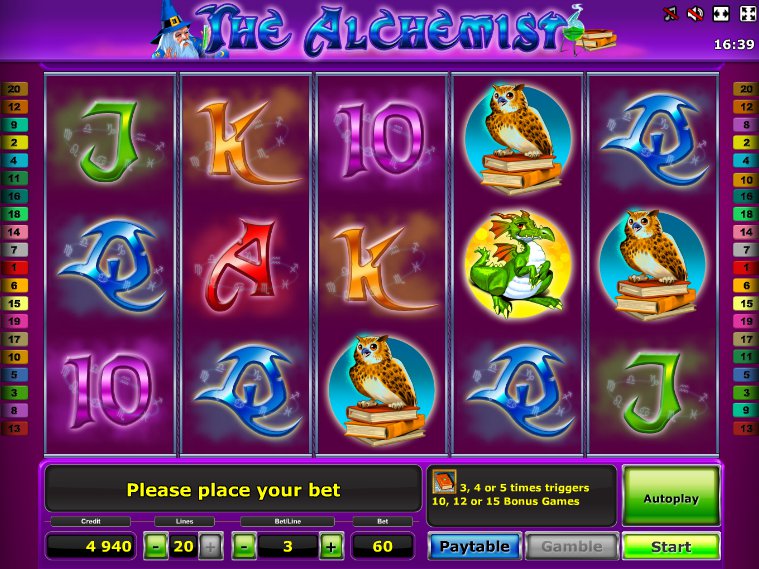 ‘Alchemist’ is developed by Novomatic and is one of the big players in the online slot industry. They are an Austrian based company and have been developing slot games since 1980. Some other games created by Novomatic include:

If you love promo's, get the best slot promotions today. 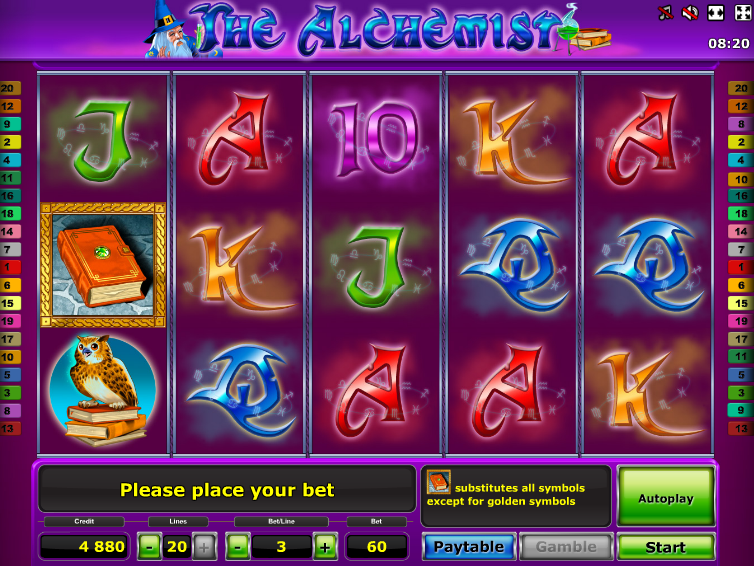 ‘Alchemist’ adopts a more traditional take on the magic with its 2-D graphics and cartoon like animation. It is still a really fun idea but leaves more magic to its players.

But with a jackpot of 30,000 credits, it’s inviting to join the wizards and match up the right mystical symbols. Choose your number of active pay lines as well as the size of bets that are placed on each line to act as a wager. There are three amounts of pay lines – 5, 10 or 20. That said, the bet per line figure can be chosen accordingly (the quantities to so are” 2,3,4,5,6,10,15,20 and 30). Thus, making the total maximum bet a magical 600 or 30,000 credits. To achieve this, you need to line up 5 of the enchanting wizard symbols over an active pay line.

Look out for the book of magic spells – this holds many secrets including a pay out of 24,000 for 5 with the maximum wager.  This book really is magic and it also acts as a wild and scatter so will replace all other symbols. A collection of books will offer free spins (3 = 10, 4=12, 5=15). The book will turn gold during the free spin rounds and act as a wild symbol

Another symbol worth knowing about is the green dragon, this reptile will pay out up to 8,000 and the owl symbol will offer 4,500. As you might expect, this lab is full of potion bottles filled with rich looking colourful liquids. These symbols will offer 3,000.  Alchemists playing can also engulf in a double or nothing game! 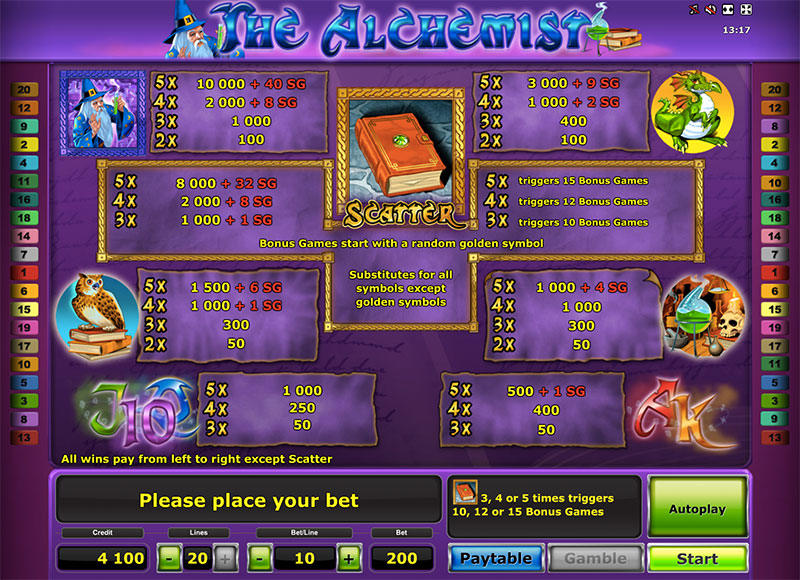 This theme is really special because its magical essence is all to play for. By that, what is meant is that it's interpretative – the graphics are not cutting edge but provide players with a nostalgic theme.