Here's a superb new online slots game from Gamevy where you can play anytime.

Boss The Lotto online game is as close as it gets to playing the lottery for real. If you love lotto this game is for you. In this simple but fast-to-play game, you pick balls at random to win a return on your initial stake, but there are good balls to pick and bad balls. In order to win you have to pick the good balls. If you pick a bad ball the game is over and you lose your stake and whatever you may have won up to that point in the game. After picking the first 6 good balls, you double your initial bet and you can choose to take the money you’ve won and end the game and play another. Alternatively, you can play on. The game continues until you either cash in your winnings or pick a bad ball in this fruit machine game.

Founded in 2013, London-based gaming start-up, Gamevy, won awards for their games in 2015 and 2016. It’s a lively and enterprising company which is fostering links with other gaming giants, such as Iforium and Microgaming. Although Boss the Lotto is the only game like real lotto, if you like Boss the Lotto, you’ll probably also like the following games from Gamevy:

If you love promo's, check out Slotsbaby. 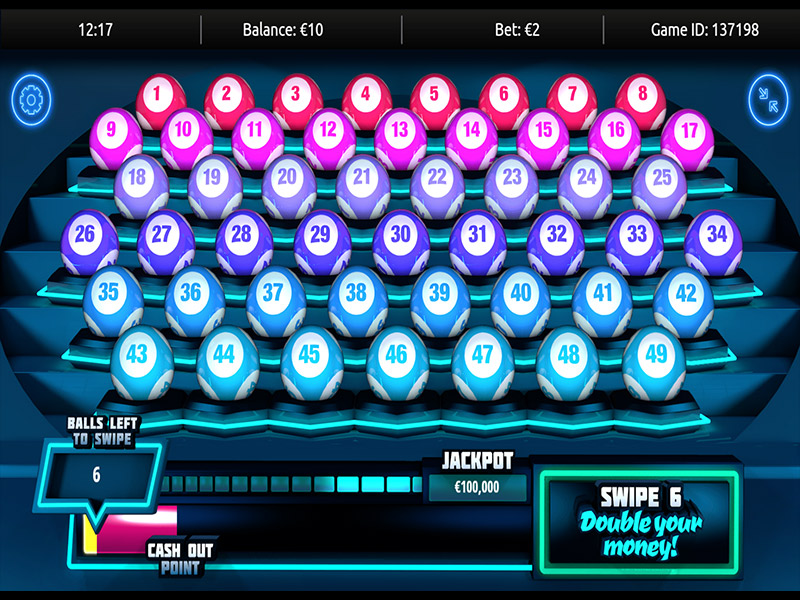 Once you’ve placed your bet, begin selecting balls. There are 49 balls to pick from. 43 balls are good and show green pound symbols. 6 balls are bad and these are black with the ball number on them. You can pick the balls individually, one-by-one, or swipe a number of balls at once to pick them at the same time.

You double our initial bet if you pick 6 good balls straight off.  Then you can either take the winnings at this point and the game will end, or you can continue to pick balls to increase the amount you could win. From the seventh good ball onwards you can cash in your winnings or carry on towards the jackpot, but once you pick a black ball, all bad balls are revealed and the game is over. 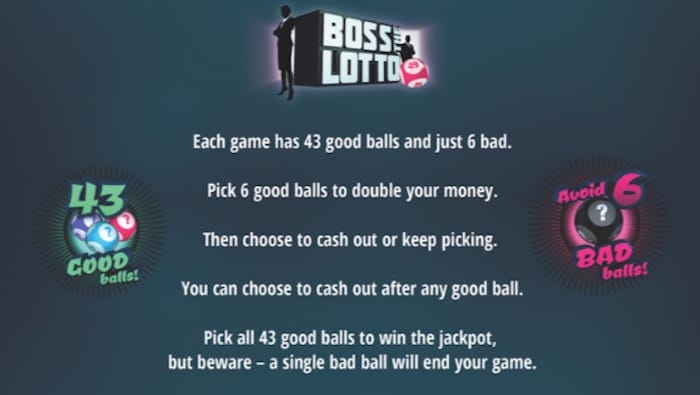 A one-of-a-kind slots game, Boss The Lotto has no paylines or reels as in other slots and no bonus rounds or auto-play. However, it is an easy game to learn and to play, the graphics are clean and attractive – the vivid colours used to shine and sparkle at you out of a black backdrop. You can play a demo version to try it out before you plunge in for real. And you can play for just £1 a game (just like the real lottery).