All is not what it seems in the world of Reptoids new online slots! This 1960s inspired new online game to task the player with finding the Reptoids who walk among us. They maybe disguised as a businessman, nurse or even a law enforcement officer, but they are harbouring a dark and disturbing secret. Under that respectable disguise is a hideous reptoid alien, trying to take over the world! Coupled with creepy and suspenseful music and a fun cartoon sequence at the beginning that shows just how high this conspiracy goes, this 5 reel, 20 payline slot offers a fun new spin on a classic alien invasion story. Get the best out of our slot promotional offers before you play the game!

Yggdrasil, the gaming company named after the immense tree that links the nine worlds in Norse mythology, has a presence in Malta, Poland, Gibraltar and Sweden. Since 2013, Yggdrasil has started small but grown a reputation among giants of the online casino gaming industry for creating innovative and engaging titles that delight players and casinos alike. The creative team are committed to delivering the highest quality gaming packages, efforts recognised in the awards and nominations the company has achieved in its short life. Popular titles include Gem Rocks, Orient Express, Rainbow Ryan and Vikings go Berzerk. Looking for more games by Yggdrasil Gaming?

Reptoids is a 5 reel, 20 payline online slot game that immerses the player in a setting where aliens walk undetected among us. As well as matching symbols and the games amusing characters, there are plenty of other special features to keep the player entertained in this mysterious and dangerous world.

Repto Detector – The Repto Detector frame moves randomly and settles on a different position on each spin. If it lands on a character, then the game turns all instances of that character on the grid into wilds.

Reptoids has a Return to Player statistic of 96.1% and was first released on November 23 2017. 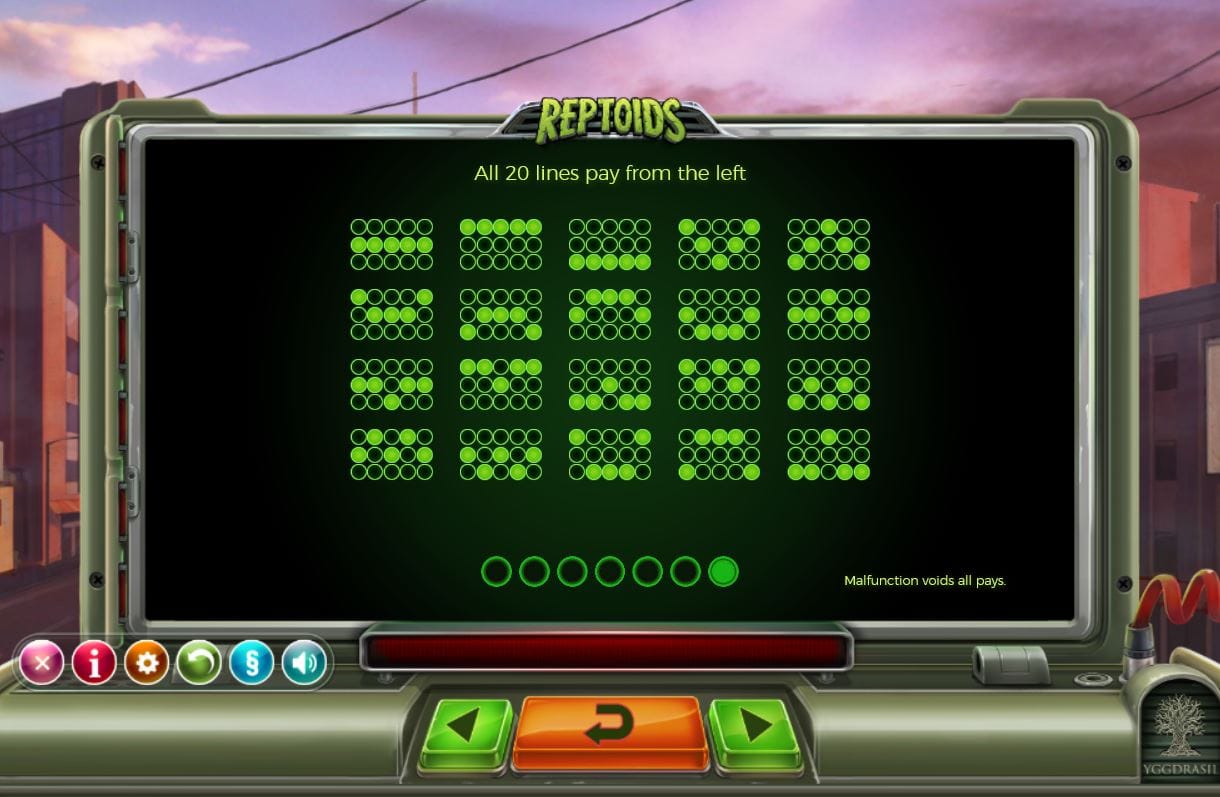 Reptoids is set to become a classic in the world on online slot machine gaming. The funky graphics and fun characters make this hunt for the aliens among us fun and engaging, while they possibilities of winning big are always present with a myriad of generous bonus features. Players will enjoy the conspiracy aspect of the story and will particularly benefit from the Repto Detector feature, which adds another fun and dynamic element to this online slot. The team at Yggdrasil have scored another hit! Fans of their work should try other titles including Jungle Books, Valley of the Gods, Power Plat and Spina Colada. If you enjoyed Reptoids why not try Deep Riches