Created by IWG, this is the latest addition to the ‘Cash Buster’ family of games, which have become some of the most popular instant win games in lotteries. Players must line up certain combinations to help them destroy the towers in a Tetris like mission. Two bonus rounds also add new dimensions to the game.

The design of the game is easy to understand yet visually appealing. Bright colours and block capsules have a retro quality that are nostalgic of your favourite old-school arcade games.

It’s also useful to know that it has a theoretical return to player (RTP) of 90.5%. Check out our entire list of Online slot game at SlotsBaby now.

IWG (Instant Win Gaming) is an international leader in the field of online instant win games, based in the trendy Shoreditch area of London.

Their innovative and ambitious creative team has recently made a pioneering move by creating the first land-based instant win game, based on the Cash Buster family. They have plans to transform Cash Buster Towers into a physical game soon too, which testifies to its popularity, so why not get some practice in now so you’re ready to master the physical version! If you love promo's, check out Slotsbaby today. 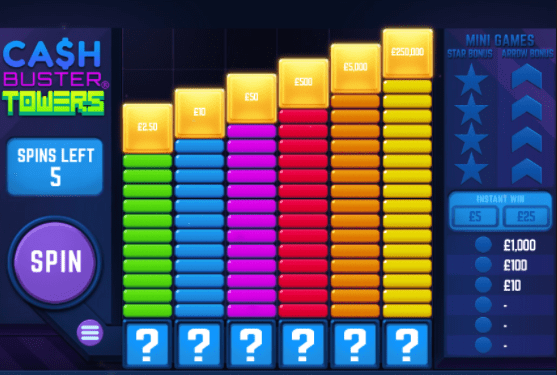 You can choose between ‘normal’ or ‘repeat’ play mode. In normal mode you take 5 spins, whereas in repeat mode you get the option to buy 1 more spin if you did not win in normal mode.

The aim is to line up symbols and numbers in the single row of 6 reels to destroy the towers. As you let the tower grow to daring heights, reaching dangerously towards the top of the screen, its destruction will earn you a higher prize.

You can win by destroying a tower (whereby you’ll bank the corresponding value of that tower), collecting 4 or more ‘dot’ symbols, or collecting an instant prize of the value displayed.

The numbers 1 to 6 will destroy that many blocks in the tower positioned above the reel that the number appeared on.

What you’ll primarily be after however is the circle symbols, as these secure instant cash wins as soon as you have at least 4 of them. Collecting 6 will secure the maximum prize of £1000! 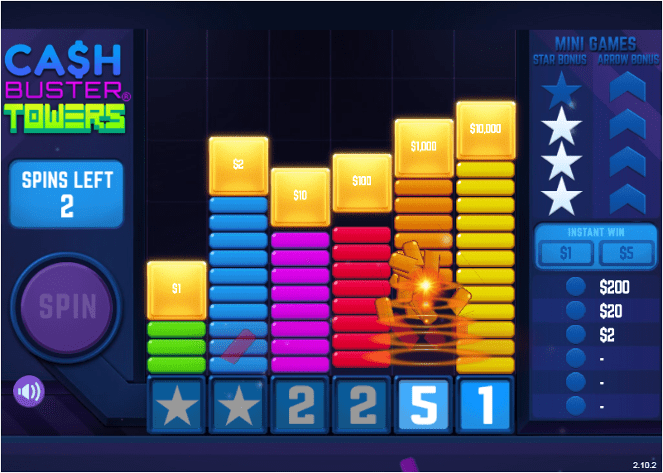 Cash Buster Towers is a great addition to Cash Buster series, and the perfect choice for anyone looking for something a bit different. It is fairly simple to play and all about chance, as the outcome is predetermined and unaffected by any choices you make, so this takes the pressure off a bit!

The best thing about this game, in my opinion, was the fun retro design and the substantial prizes!

The exciting news that it is due to be made into a physical game soon adds to the excitement surrounding this game. If you enjoyed Cash Buster Towers then you might also like Cash Cuisine