To the American Indians, the wolf is one of the most spiritual of creatures. They often took them as their spirit animals and even named themselves after these great beasts. There aren’t any Native Americans in new online slot games, but everything that they believed lives on in these reels. Follow your calling to the North American desert and celebrate the wolf by spinning the reels of Wolf Gold.

This 5 reels by 25 pay line slot will have you howling like a wolf in no time at all! The Indian Americans worshipped the wolf as well as other animals of the land and so should you. These spirit creatures promised hope, promise and tranquillity to the native Americans which is why they take centre stage within the reels. Only the rigorous shall be rewarded, will these spirit creatures favour you? You must play to find out! Every creature has its natural strength, giving each a sense of unique power and responsibility.

The wolf resembles hunger and determination and persistence for rewards. We encourage players to think and feel like the wolf with every spin of reels. This slot can always be considered of best around as a result of its top of the range visual aspects, its cool tone of colours and its backstory, it couldn’t possibly get any better, could it? Of course, it can, as these reels are not only full of our favourite animals, but it’s also another slot that's packed with stacked wilds, re-spins and huge cash prizes too! Check out our entire list of new slot games here at SlotsBaby.

The guys at Pragmatic Play have devised the whole scenario of the Wolf Gold slot. They have only been around for three years, but in that short time, they have definitely done everything they can to leave their mark in the casino gaming world. The company has made waves within a short period by making stunning games which are loved by players such as Wolf Gold. They are known for their highly innovative games which often feature bonus rounds that feature multiple screens – just take a look at Reel Gangsters for example. All of their calling cards are here in Wolf Gold, just as you would expect.

Building a reputation for creating new games that are both entertaining and unrivalled is no easy means. The companies incredible rise in the industry has a result of games such as Pixie Wings and Jurassic Giants. Pragmatic Play has produced a large bulk of the newer games on the market to date. Players can’t get enough of this Maltase based igaming developer, The company can deliver a high standard gaming experience by introducing the latest advancements in the mobile and desktop across all games.

The 100+ igaming specialist has enables the company to efficiently move forward. The fast-paced development of the company is a product of the team's hard work and dedication. Pragmatics plays distinction has been recognised by masses, consequently, the company has received multiple slot games rewards.

The EGR B2B Awards awarded the team with Software Rising Star category for a combination of graphically superior graphics with extremely playable and appealing gameplay. As you can guess Pragmatic play has some big things lined up in the near future, so, keep an eye on Pragmatic Play because there’s a lot more to come from them yet! If your interest in Wolf Gold, you should check out the large range of Pragmatic Play games which are featured on Baby Slots. Baby Slots assures endless fun playing Pragmatic Play slot games.

Get the best out of our UK casino promotions before you play the game! 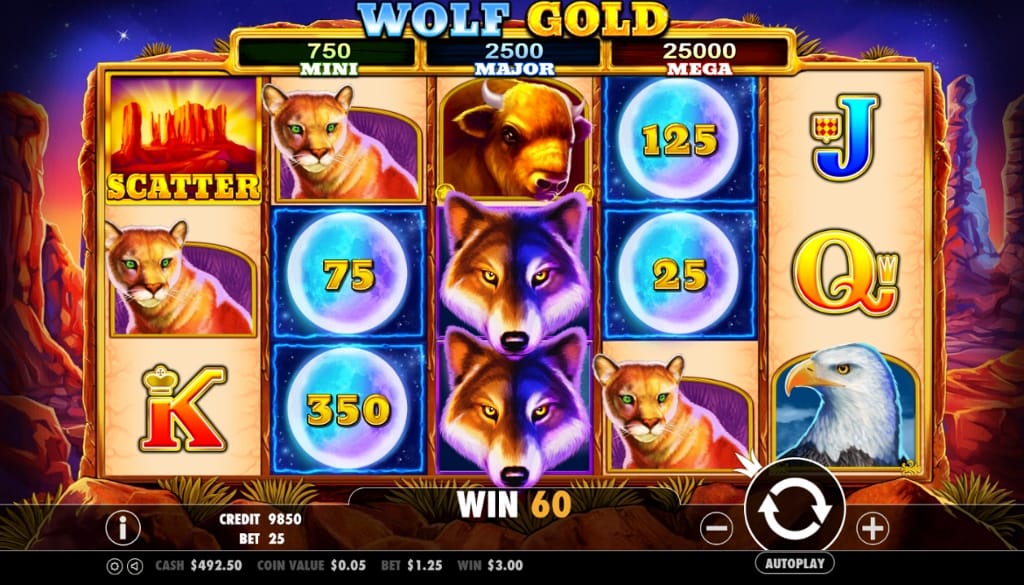 When you arrive in the desert, it will be dusk, and an eerie red sunset will illuminate the game board. There will be red rock formations to either side of you and right in front is the game board. You’ll hear all of the calls of the local wildlife – there’ll be the howl of the wolf and calls from various kinds of birds.

The board features five reels and a remarkable twenty-five pay lines. It appears to have been carved out of stone and features some familiar symbols. Letters of the alphabet represent the lower values while some animals, including bald eagles, buffalo and horses represent the higher-value symbols. It’s the animal kingdom symbols that will help you win the bigger jackpots. As well as these basic symbols, there are some special ones that could increase your winnings further.

Thanks to the Money Respin Bonus, Wolf Gold is a game full of non-stop excitement. And the payout rate isn’t to be sniffed at either! If you enjoyed Wolf Gold why not try Sirens Serenade