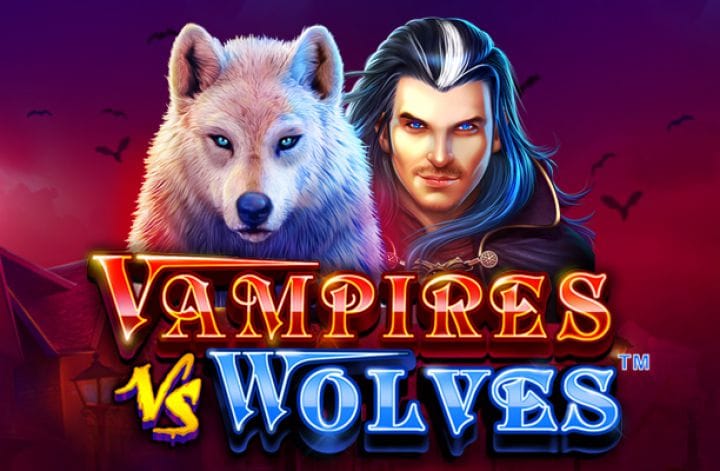 Review of the Vampire vs Wolves UK Slot Game

The battle between Vampires vs Wolves has been going on for ages in history. Of course, only the true believers know that’s the truth and everyone else is yet to share the Twihard or Vampire Diaries excitement. Pick your opponent and get ready to witness some of the most gore action you’ve seen in any other Vampire slot. Pragmatic Play has packaged this Vampires vs Wolves slot well with the action being set under a floodlit street. The creepy soundtrack adds to the mysterious atmosphere, so don’t go playing this slot at night if you scare easily.

Symbols on the reels include spade gemstones, heart, diamond and club. There are also various characters on the reels that represent the vampires. The one sporting white hair pays the highest value of 2.5x, 12.5x or 80x your bet when 3, 4 or 5 lands on the reels. The wild symbol in the game can substitute all other symbols on the reels except the scatter. 3, 4 or 5 wilds reward 2.5x, 15x or 100x your bet respectively. Vampires vs Wolves also includes 2 scatters i.e. the howling wolf and creepy castle. The scatters appear on the 1st and 5th reels only.

The Vampire Free Spins feature will start up with 8 free spins. 3 character symbols with a red border transform into vampire symbols. When a vampire symbols lands on the reels, it can randomly transform into a wild and lock in position for the rest of the feature. This way, you end up with sticky wilds.

Pragmatic Play - The Developer of the Vampire vs Wolves Casino Game

Pragmatic Play was established in 2015. The company is one of the fastest growing online casino game providers in the industry. Pragmatic Play has employed over 100 highly-skilled professionals who are responsible for developing each of their incredible games from the company's main office in Sliema, a sunny resort town in Malta.

Pragmatic Play has also earned recognition in the community and has received several awards. In 2017 alone, they won the Software Rising Star award at the EGR B2B Awards, the Best Gamified Experience, the Best Digital Company of 2017 and Best HR Director of the Year all at the Malta iGaming Excellence Awards in one night. That was super impressive considering the company was barely 2 years old. Pragmatic Play has encountered near misses too like in 2016 and 2017 when they were shortlisted for game of the year for Hot Safari and Queen of Gold in 2017. They missed out on these awards at the EGR Operator Award ceremony.

Pragmatic Play has acquired licenses from reputable gambling regulatory bodies in Malta i.e. the Malta Gaming Authority and another one in the UK i.e. the UK Gaming Commission. These are two of the hardest licenses to acquire. Pragmatic Play can operate in Italy thanks to their license acquired in AAMS in Italy, they have also been certified by Romanian authorities, have a license from Curacao's eGaming certification body and also the Philippines' regulatory body, PAGCOR. In recent years, they’ve been able to acquire licenses from the Bahamas before they expanded into Denmark. Some of the new slots that Pragmatic Play offers include bonus features like free spins, sticky wilds, rolling reels, etc. If you like the same of this game, try out the Wild Gladiators slot! 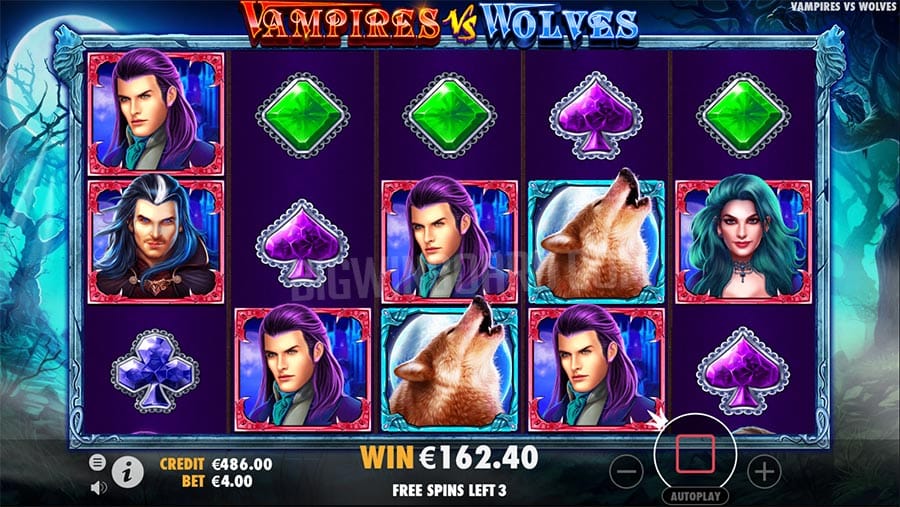 Final Thoughts on the Vampire vs Wolves Slot

If you enjoy the Vampires vs Wolves theme, then you just found your next best online casino slot. Pragmatic Play did a good job at packaging a slot with nice visuals, amazing bonus features and entertaining slot action. It’s also a very easy slot to play and it lacks any complex bonuses that will take you ages to learn how to trigger. Making the free spins feature have two subsections of free spins i.e. the Vampire Free Spins feature or the Wolf Free Spins feature.

Spinners will enjoy playing Vampires vs Wolves by Pragmatic Play– the graphics, soundtrack and animation all make it come together. The 2 free spins features bring the slot’s winning potential even higher. If you enjoy watching blood-sucking vipers battle sweaty creatures with claws, then check this Pragmatic Play slot out to enjoy some gory action.