Here's a superb new online slots game from Eyecon which you can have fun playing.

As well as the fish-based delicacy, the game also touches on other references to Japanese culture such as the Hiragana symbols positioned all over the game board. If you love promo's don't forget to check out our latest online slot bonuses

Check out our entire list of slot games here: SlotsBaby.

Founded in 1997 as a computer game company before re-positioning themselves by building an online casino system in 1999 and finally releasing Temple of Isis, their first slot game, in 2003, Eyecon have now built up a library of more than 60 games.

They have headquarters both in Brisbane, Australia and Alderney, Guernsey and have continued to release some great games year after year. Their slot games alone have generated more than six billion spins in a year! 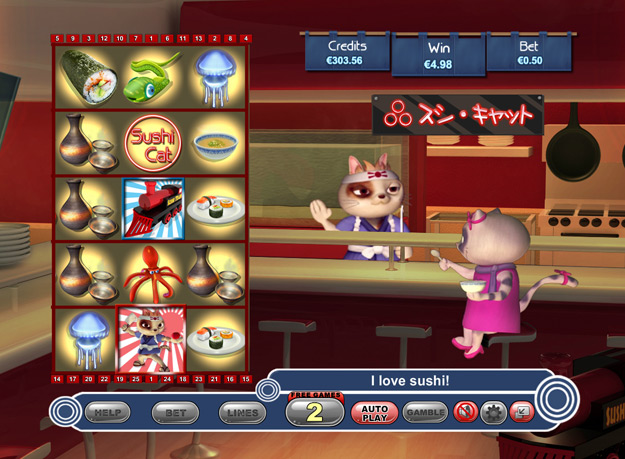 The game comes with 5 reels and 25 pay lines. You are also given the option of being able of being able to ambles with your prizes after every win.  The game has given you a ‘Gamble’ button, which can be found towards the bottom of the screen. This allows you to try and double or quadruple of your money – or lose it altogether if you’re unsuccessful.

In terms of the pay table available in the game, the symbols used mainly consist of small animals and sushi. There are tow main types of symbol: those of lesser value and those of higher value.

The symbols that appear on the reels the most frequently and are therefore the least valuable are the sushi sauces, sushi on a plate and in a bowl, a sushi roll, a green fish and a blue fish. Symbols which will be worth more to you include: an orange crab and a red octopus.

The most valuable symbol in the game, and therefore the one which appears on the reels the least, is a blue fish lying on a chopping board with a knife beside it. If you can locate five of this symbol and get them lined up along one pay line, that would pay a massive 250,000 coins.

The game’s Wild is the Sushi Cat. This means that it can substitute itself with any other symbol I the game – apart from the game’s Scatter symbols: the Sushi Girl and Sushi Train.  When replacing other symbols, the Sushi Cat can help you to complete those all important big winning combos.

The karaoke bonus mode gives the player a list of songs to choose from. If you pick correctly, you could have your winnings multiplied by 10. 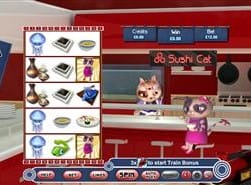 This is an endlessly fun and amusing game, centred around a cat who runs a sushi restaurant. Ideas like the karaoke mini-game set it apart from other online slots and maybe you’ll also learn a bit about Japan too! If you enjoyed Sushi Cat then you might also like Bingo Billions