It is time for punk to return to centre stage. Not you Johnny Rotten, or you Joey Ramone! We are talking about Steampunk! This revolutionary online casino game comes courtesy of casino gaming titans, Microgaming. You can find this game on Slots Baby, Oh behave! Excited? Us too! Microgaming never release a dud, and we expect that Fortunium will not be the exception. From its advertisements and promotional material, it looks extremely exciting. The visuals look promising. There are three fantastic bonus features in this game. So, grab a top hat, braces and your best pocket watch and head on over to Slots Baby, yeah!

'What the aerodrome is a steampunk?' some of you may be asking. Well for those of you not in the 'know, the steampunk movement began as a literary sub-genre within science fiction. The word steampunk began as a jokey play on the term ‘cyberpunk’. It was not until the nineteen-eighties that this term was coined. However, many works of fiction which predate the term are commonly described as being steampunk. These texts include works by authors H. G. Wells, Philip Pullman and China Mieville. Steampunk texts often show an alternative futuristic reality. This is usually a future which depicts a mix of modern technology and Victorian style. Today, there is a large community of steampunks fans who often enjoy dressing up in the iconic steampunk garments. They enjoy sharing stories and artwork that they have created in the steampunk style. It is a huge cultural phenomenon. 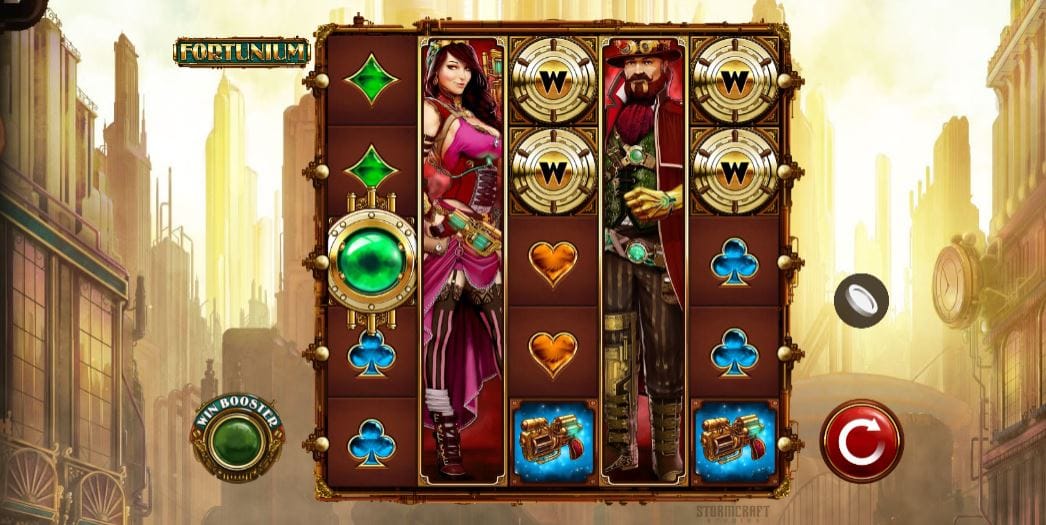 Microgaming has been around since 1994 and claims to have created the first online casino. In 2004, they created the first mobile casino software. They are true innovators of the industry. They are currently based on the Ilse of Man. In general, they release about two brand new games every month. You may have heard of some of their previous releases.

Get the best out of our slot bonus spins before you play the game!

In an unconventional twist, there are 5 reels and 5 lines in Fortunium. Although complex, this means there are many more chances for you to win big! In fact, there are a total of three bonus features within the game.

Additionally, you can play from as little as 10p per spin. It is almost like you can play the game for free! There are also opportunities to boost your total win by activating some of the fantastic game features. The symbols are the typical well-known playing card suits. Of course, this includes black clubs, red diamonds, black spades and red hearts. However, the game has its own unique spin on the symbols included in the game. This includes steampunk style objects, like airships and treasure chests. You also have WILDs in the form of special characters from the game. And Mystery Reels can appear on the reels. Other great features include:

The graphics in this game are absolutely and unquestionably the best graphics we have ever seen from any online casino slot game. Big statement, right? But, we are telling the whole truth and nothing but the truth. We will even place our hand on Vandermeer's holy Steampunk Bible! Microgaming has put a lot of time in sculpting this digital masterpiece. We loved the design of the Fortunium city. In particular, the golden streets, and emerald coloured windows. The buildings are crafted in a steampunk aesthetic, a mix between modern and Victorian. You will see plenty of clock towers and bronze piping in this town.

So, do not be a bludger or a nickey. Try Fortunium today at Slots Baby! It is a fantastic and unique online casino slot game. It does not matter if you are steam-headed or not, you will enjoy this game! It has an intricate and stunning graphical design. The bonus features ensure you can win often and win big. Fortunium is available across all the major platforms: phones, tablets and computers. It is more than your average online slot. It is an exploration and adventure extravaganza. We loved meeting the games interesting cast of characters and their beautiful stylish attire. In addition, we really liked exploring the steampunk-styled universe. This is a game where you get to choose how you want to play. This online casino slot game is a masterpiece, crafted by the geniuses at Microgaming. It is a game that will keep you playing for hours, days, weeks and months.

If you enjoyed Fortunium why not try God of Wild Sea.