Avalon II- Quest for The Grail

Whether we read of it in Medieval literature or know it from the Monty Python film, we’re all familiar with King Arthur’s quest to find the Holy Grail.  Legend has it that centuries ago, Arthur and his knights of the Round Table set out on a great journey to seek this cup, out of which it is said Jesus drank at the Last Supper.  Avalon 2: The Quest for the Grail brings this legendary story to life in the 21st Century, in the form of a truly epic and bonus-rich slots adventure. If you love promo's don't forget to check out our slot machine bonuses

Among the founding members of the Interactive Gaming Council, Microgaming has been making a major impact on the online slots world for many years.  Alongside blackjack, baccarat, and other casino games, at least half their impressive catalogue is made up of online slots treats, all of which are highly-polished titles, matching Avalon II in their ambitious themes, glorious graphics and inventive bonus features.  Some of these titles include: 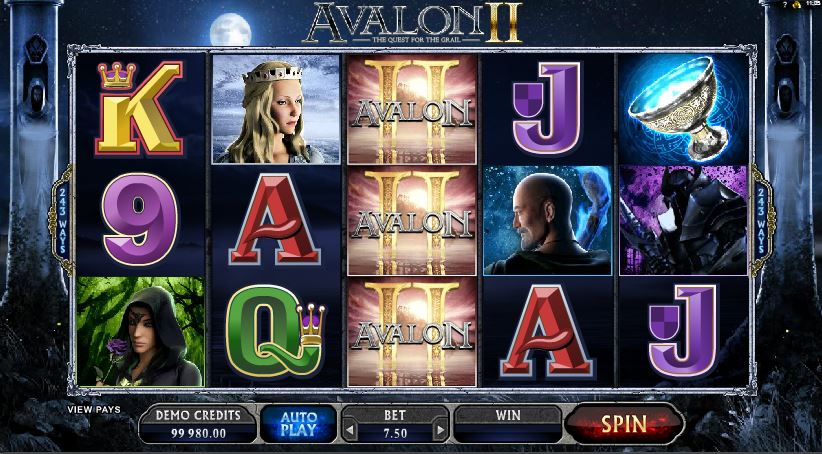 When you first enter this game, the background landscape spreads across the screen like a beautiful watercolour painting.  A shimmering lake, rolling banks of clouds and two tall stone pillars, one on either side of the reels, which house statues of mysterious hooded figures.  The orchestral soundtrack is inspiring, like something from a fantasy adventure film.  The 5 reels house a variety of photo-realistic symbols, including the Black Knight, Morgan le Fay, the Lady of the Lake, Guinevere and King Arthur.  Some of the game’s bonus features include: 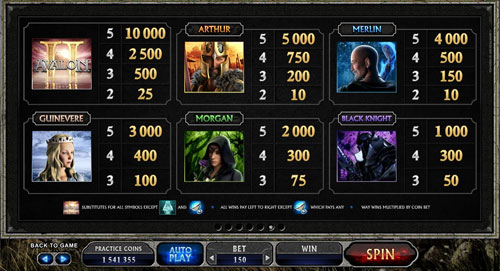 This game is as immersive as it gets, not only because of the realistic graphics, but also because the bonus features are cleverly integrated to take the player on a narrative journey.  Avalon 2: The Quest for the Grail is just the follow-up we’d expect from Microgaming’s dazzling Avalon slots game, with all the adventure, bonus chances and play value of the original, and then some.